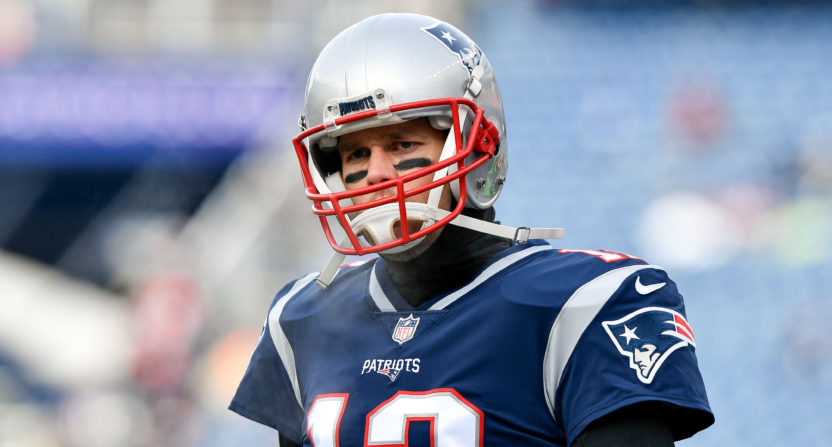 Where: Gillette Stadium in Foxboro, where the Patriots are 16-3 in playoff games (the first came against the Titans in 2003).

TV: CBS, with Jim Nantz, Tony Romo, Tracy Wolfson and do I really have to list Jay Feely?

1. New England doesn’t lose at home in the playoffs. This is why it’s so important that the Pats earned home-field advantage throughout the AFC postseason. Both times they’ve had that in the past four years, they’ve won the Super Bowl. Both times they haven’t, they’ve lost their first road playoff game (in both cases to the Denver Broncos). During the Tom Brady/Bill Belichick era, they’re 17-3 in home playoff games. Meanwhile, prior to beating the Kansas City Chiefs in comeback fashion in the wild-card round, Tennessee hadn’t won a road playoff game since 2004.

Average score of those games?

2. But the Patriots are limping. A team without top receiver Julian Edelman and top defender Dont’a Hightower just hasn’t been right, despite its 13-3 record. Brady completed just 61.3 percent of his passes for an 81.6 passer rating and a 6-to-5 touchdown-to-interception ratio in five December games, and he often didn’t look himself. That’s concerning because he’s 40 years old and he also faded down the stretch when he last played a complete season, back in 2015.

3. No DeMarco, no problem. The Titans will once again be without veteran running back DeMarco Murray, who is dealing with a knee injury. But “backup” Derrick Henry actually had a much better season and is coming off a tremendous performance (156 yards on 23 carries) against the Chiefs. Henry is a bruiser who can run over guys. And that’s scary, because according to Football Outsiders New England had the worst run defense in the NFL in rushes up the middle in 2017.

4. For the Titans to pull off the huge upset… Henry and quarterback Marcus Mariota will again have to hijack the game, which won’t be as easy in Foxboro. Still, those two are tough to stop when they’re using their legs as best they can. And even if both do that, the Titans will need to get some help from their underrated defense. Everyone knows that the key to limiting Brady is pressure up the middle, and Titans Pro Bowl defensive tackle Jurrell Casey was an absolute monster in Kansas City.

If Mariota, Henry and Casey dominate and the Titans avoid big mistakes (Mariota threw a career-high 15 interceptions during the regular season), they’ll have a small shot.

5. Distraction mishractions. It’s entirely possible that controversial, damning ESPN story about the deteriorating relationship between Brady, Belichick and Bob Kraft will cause the Pats to completely come apart at the seams. But an Angry Patriots team is a scary Patriots team, so this could go either way. Belichick isn’t likely to let his team be overwhelmed by distractions.

Under-the-radar potential X factor: Patriots safety Duron Harmon isn’t an every-down player, but he also seems to be in the right place at the right time when games are on the line. The 26-year-old quietly has 13 regular-season and playoff picks in five years. And according to NESN, 10 of those have come in fourth quarters, six in the final two minutes of games.

Prediction: The Patriots could run into trouble these playoffs, and this matchup isn’t as one-sided as many believe. But I think they grind it out against a team that is a lot more mistake-prone and has a lot less experience. Patriots 27, Titans 17