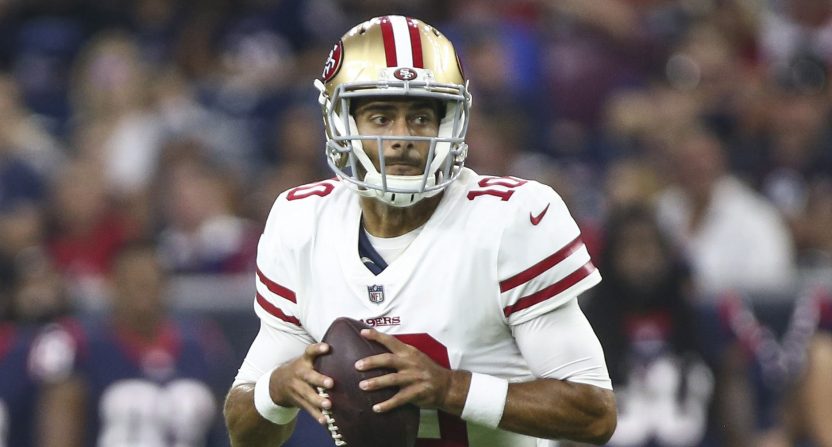 The Comeback is previewing all 32 NFL teams from worst to first leading up to the start of the 2018 regular season on Sept. 6. Up next in our preseason rankings are the high-buzz San Francisco 49ers.

2017 in a nutshell: They trade for Jimmy Garoppolo in the midst of a tough 1-10 start, install Garoppolo as the starter for the final five games, and magically go 5-0. Now they’re basically being lauded as the best 6-10 team in NFL history.

What’s different: Garoppolo is coming off his first offseason with the team, and he’s joined by newbies Mike McGlinchey at right tackle and Jerick McKinnon at running back.

Why they could be awesome: Garoppolo could be the real deal.

Why they could suck: The league could have figured Garoppolo out after he took everyone else by storm last year.

Breakout watch: Cornerback Ahkello Witherspoon didn’t play much early on as a rookie third-round pick in 2017, but he really shined while intercepting a pair of passes during the second half of the year.

Position to watch: The defensive line has the ability to be incredible with recent first-round picks Solomon Thomas, DeForest Buckner and Arik Armstead leading the way, but none of those guys have come through yet and Armstead risks becoming a bust. That unit will be fun to watch in 2018.

Prediction: I’m not completely buying into the hype, mainly because Garoppolo has started just seven games in his career and he’s lacking support in that offense. The receiving corps isn’t deep nor particularly talented, McKinnon isn’t suited for a top-dog role and the line isn’t special. In a tough division, they’re not ready to take off.