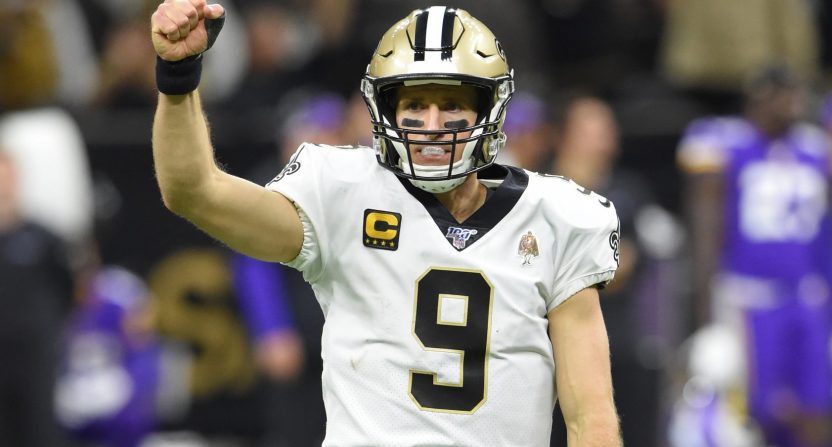 With the 2020 NFL regular season launching this week, we’re breaking down every division in a digestible fashion (you can see the AFC South here and AFC West here). Here’s a rundown of the NFC South:

2019 result: 7-9, 2nd place
Major additions: RB Todd Gurley, TE Hayden Hurst, edge Dante Fowler Jr., CB A.J. Terrell
Major losses: CB Austin Hooper, CB Desmond Trufant, edge Vic Beasley Jr., edge Adrian Clayborn, LB De’Vondre Campbell
Why they could kick ass: They’ve done it before with the same general core on both sides of the ball and the same head coach, and they suddenly started to do so again with a 6-2 finish to the 2019 campaign.
Why they could suck: They’ve had similar talent in each of the last three seasons and have consistently fallen on their face. Why should we trust them now?
2020 prediction: 10-6, 2nd place, wild-card loss

2019 result: 5-11, 4th place
Major additions: QB Teddy Bridgewater, G John Miller, WR Robby Anderson, DT Derrick Brown, edge Yetur Gross-Matos, edge Stephen Weatherly, CB Jeremy Chinn
Major losses: LB Luke Kuechly (retired), G Trai Turner, CB James Bradberry, TE Greg Olsen, DT Gerald McCoy, edge Mario Addison, DT Vernon Butler, G Greg Van Roten
Why they could kick ass: Bridgewater is getting his first chance to run an offense from the get-go in half a decade, and he won each of his five starts with the Saints in 2019. His running back, Christian McCaffrey, is one of the most electric players in the sport.
Why they could suck: They’re rebuilding following an offseason with massive changes. The defense is young and in transition, and new head coach Matt Rhule will likely need time to put it all together with this roster.
2020 prediction: 5-11, 4th place

2019 result: 13-3, divisonal-round loss
Major additions: WR Emmanuel Sanders, C Cesar Ruiz, S Malcolm Jenkins
Major losses: S Vonn Bell, LB A.J. Klein, CB Eli Apple, G Larry Warford
Why they could kick ass: They’ve won more games than anybody else in football the last three years and look as strong as ever entering 2020. There might not be a deeper roster in the league.
Why they could suck: Quarterback Drew Brees is 41, which means he could fall off a cliff at any moment. Besides, they keep flunking out of the playoffs in brutal fashion.
2020 prediction: 12-4, 1st place, Super Bowl loss