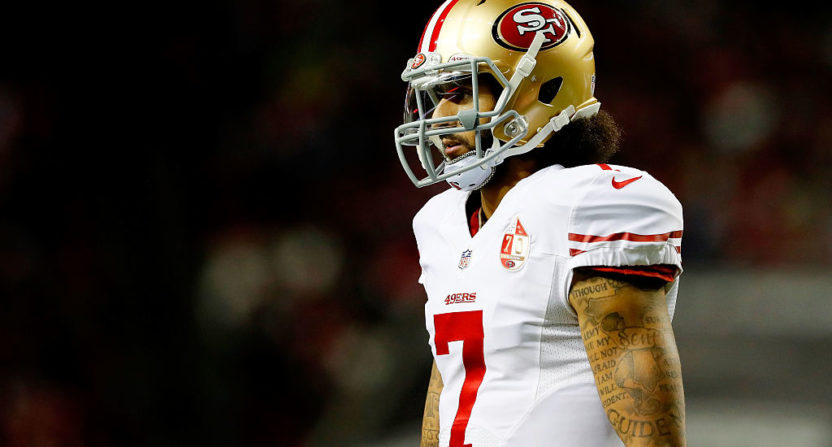 Kind of hard to believe, but at this time three years ago, Colin Kaepernick was awarded a lucrative $114 million contract extension from the San Francisco 49ers.

Fast-forward to today and the quarterback is now a free-agent who has yet to sign a deal with a new team for the 2017 NFL season. Despite the fact that Kaepernick finished last year with a 90.7 quarterback rating, 16 touchdown passes, and the sixth-best interception percentage (1.2) in the league during his 12 games.

But thanks to his selfish acts of donating a total of $1 million to various charities recently and protesting basic human rights last season, NFL teams have felt they were better off signing quarterbacks who would not even think about doing the horrible things that Kaepernick committed last year. They signed several other quarterbacks. 23 of them, in fact.

So who are the 23 non-rookie signal callers who were given a new contract this offseason over Kaepernick? Well, let’s find out.

Cutler was a little over a month away from being inside the broadcast booth performing his new gig as an NFL color commentator for Fox. But Miami Dolphins quarterback Ryan Tannehill went down during one of the team’s 2017 training camp practices and the Dolphins felt the recently retired, 34-year-old Cutler was their best option as a replacement under center for this season.

Despite the fact that Glennon has not started a game since Week 9 of the 2014 season, the Bears still thought the young quarterback was worth signing to a contract that guarantees him $19 million over three years. Oh, and Chicago felt so good about their new quarterback that they traded up in this year’s draft to select North Carolina signal caller Mitchell Trubisky

The 49ers are Hoyer’s sixth team in the last seven years. Nothing else needs to be stated here.

After having a great season in 2013 with the Eagles that saw him finish with 27 touchdown passes, Foles has not even thrown 24 touchdowns in his last three seasons combined. Although, he may be one of the few quarterbacks on this list that actually still has a chance at a decent career in the NFL.

The last time McCown led a team to more than three wins in a season was in 2004 with the Arizona Cardinals when Emmitt Smith was his running back.

Less than four years into his NFL career, Jones has already reached his ceiling as a backup. The Steelers are certainly not grooming him to be Ben Roethlisberger’s replacement when he finally decides to retire.

Barkley got a shot in 2016 to make a few starts for the Chicago Bears and did not do much with the opportunity except throw 14 interceptions. In the urban dictionary, this is also just the definition for a typical Bears quarterback.

Somehow, Fitzpatrick has managed to start at least eight games in each of the past nine seasons. He also only led a team to more than six wins in one of those nine seasons.

Once a record-setting college quarterback at the University of Houston, Keenum now finds himself in the battle for the Vikings’ backup job in 2017 with a young signal caller in Taylor Heinicke who is most famously known for severing a tendon in his foot after he kicked through the glass pane of a door.

When he is not busy getting his jaw broken by a teammate, Smith can be seen on the field trying to maintain his career 72.4 quarterback rating. By the way, Kaepernick had a 90.7 quarterback rating last year during a season in which he apparently struggled.

Does anyone know who this guy is? Well, he has actually been in the NFL since 2008. Who knew?

Part of the illustrious 2011 quarterback draft class, Gabbert has never thrown for more than 12 touchdowns in any of his six seasons in the league.

In his seven years in the NFL, Daniel has thrown only one interception. He has also only thrown one touchdown pass, but who really cares about scoring points anyway?

Perhaps in fear of their own defense calling for Kaepernick to replace Russell Wilson at some point in 2017, the Seahawks took the safe route instead and signed Davis and his three career wins.

Yates actually has a playoff win under his belt. Not many included on this list can say that. Most also cannot say that they finished a season with a 11.7 quarterback rating like Yates did in 2012 with the Houston Texans.

Now that he is back in his hometown state of Pennsylvania, McGloin can show Eagles fans the arm that has not thrown a touchdown pass since September of 2015.

It seems odd that a former first-round draft pick has only started a total of seven games in the past three seasons. But it is also odd that Manuel was drafted in the first round to begin with.

Nassib was the star quarterback at Syracuse back when he played college football. Syracuse is not a football school.

As surprising as it would have been for the Cowboys to sign Kaepernick, it may be even more surprising that they did not. There had to have been a moment this past year when Jerry Jones thought of all the publicity and jersey sales that signing Kaepernick would have produced for his franchise.

Drafted in 2014 and has five career pass attempts. Hall of Fame running back Ladainian Tomlinson had a total of 12 pass attempts during his 11-year career.

So if Fales keeps up the pace, he should be able to easily have more pass attempts than Tomlinson by the time his career in the NFL comes to a close.

Murray is so good he has already been signed and released this offseason by the Los Angeles Rams. The Rams obviously thought he was going to be a better option than Kaepernick since Murray has never been sacked or turned the ball over in during his time in the league.

Oh, maybe it should be mentioned that he has actually never appeared in an NFL game either.