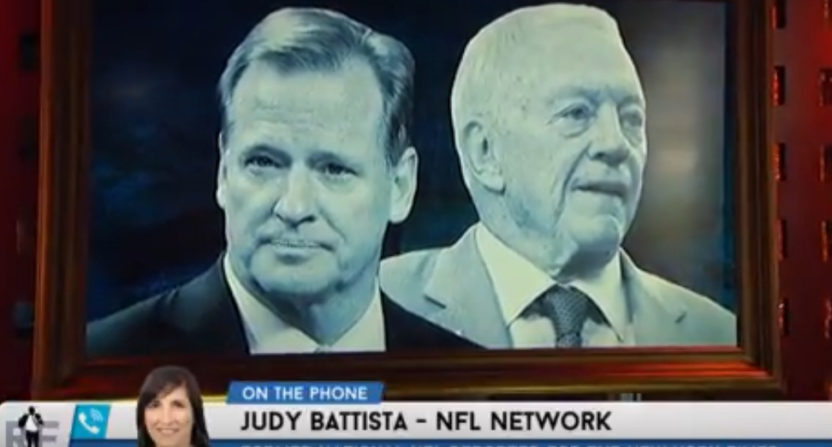 The feud between NFL commissioner Roger Goodell and Dallas Cowboys’ owner Jerry Jones entered a new chapter this week, with an initial report that Goodell was set to fine Jones millions over attempted interference with Goodell’s contract extension (including a threatened lawsuit against the owners on the compensation committee) that later changed into the league forcing Jones to pay $2 million in legal costs. NFL Media’s Judy Battista called in to The Rich Eisen Show Wednesday to discuss this, and said her reporting indicates that this move against Jones isn’t just about Goodell, but rather comes from and is endorsed by the vast majority of owners of the league’s 32 teams.

That clip starts with Eisen (who hosts NFL Network’s NFL Total Access) talking about the challenges in covering this story, asking Battista “What is going on with Roger Goodell and Jerry Jones, or, as one member of the NFL Media group asks another, what’s going on between our boss and one of our bosses?” Battista responds “Well, I think to phrase it better, it’s one of our bosses and all the rest of the bosses. I have been told by more than one person that this is not a Roger Goodell initiative. The push from this is from the other owners who were not happy with Jerry Jones threatening to sue members of the compensation committee and hiring David Boies and making that public. They were not happy with those threats. The push to recoup the legal fees that they incurred, which are around $2 million, maybe in excess of that, that came from the ownership.”

Battista then continues by detailing the next steps, which include Jones appealing and a hearing on that being held either by Goodell or his designate next week. She says the “smart money” is on Goodell designating someone to hear that. Eisen then asks which owners are pushing for this, and Battista says it’s almost all of them.

“I was told if you polled the owners, there would probably be 28 or 29 who are in support of this. I was told the owners were pretty angry. I mean, you can go through the list of the people on the compensation committee. These are some of the most high-powered owners in the league, Arthur Blank, John Mara, Robert Kraft. These are some of the most influential owners in the league, and they did not appreciate being threatened by a fellow owner. I think what bothered them as much as anything is airing the league’s dirty laundry in public. That’s not something they usually do, and this was very public and was very acrimonious, and it was owner versus owner, and they don’t like that. So they want to clamp down on this, and they have the means to do it. There’s a rule on the books that’s been there since Al Davis, and they’re going to use it.”

It’s fascinating that so much of the league appears to be lining up in opposition to Jones here. And there’s every reason to believe Battista’s report; yes, she works for NFL Media (as does Eisen), but she’s had a distinguished reporting career (including at Newsday, The Miami Herald and The New York Times), and this report seems to line up with the lines of what many others have mentioned. It’s looking more and more like Jones is on the fringes of the NFL over this particular behavior, and that could wind up being quite costly for him. We’ll see how it plays out, but the odds of Jones not having to pay that $2 million in legal costs are looking pretty slim.