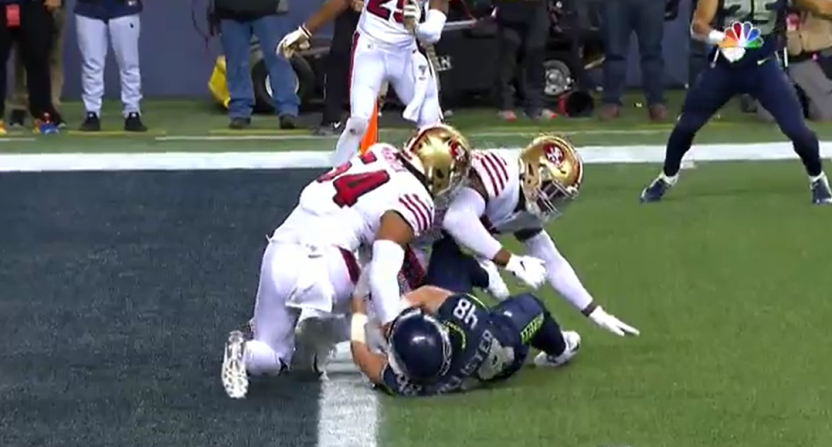 The San Francisco 49ers beat the Seattle Seahawks 26-21 on Sunday Night Football to win the NFC West and secure the NFC’s No. 1 seed, and they did so by literally inches.

That was a fittingly chaotic finish to a very eventful final series for the Seahawks. Seattle actually had 1st-and-goal from the 1 after Wilson connected with rookie wide receiver John Ursua on 4th-and-10. Valuing the clock over the down with no timeouts remaining, Wilson spiked the ball to set up a 2nd-and-goal with 22 seconds remaining.

That turned 2nd-and-Goal from the 1 into 2nd-and-Goal from the 6, with no timeouts remaining. That is a significant difference, and immediately eliminates any chance to call a designed run play, for example. However, the Seahawks probably should’ve gotten the ball back at the 1-yard line after the 3rd-and-goal play, which was a missed defensive pass interference call (and which somehow didn’t draw an automatic booth review):

The 49ers committed obvious, blatant pass interference that the officials missed — exactly the kind of missed call that instant replay review of pass interference was supposed to prevent — and the booth never signaled for it to be reviewed.

Still, it’s hard for the Seahawks to blame anyone else too much after the unacceptable Delay of Game call on 2nd-and-goal.

And in the end, the better football team won. San Francisco has been the NFC’s most deserving team of the No. 1 seed this season, and it would’ve felt a bit ridiculous if the Green Bay Packers ended up with the top seed, which is what would’ve happened if Seattle won on Sunday night.

The 49ers pummeled the Packers 37-8 last month, and took down the Saints in a 48-46 classic earlier this month. They finished the season with a point differential 52 points better than any team in the NFC. They deserved the NFC’s top seed, and were rewarded for it on Sunday night. Barely.