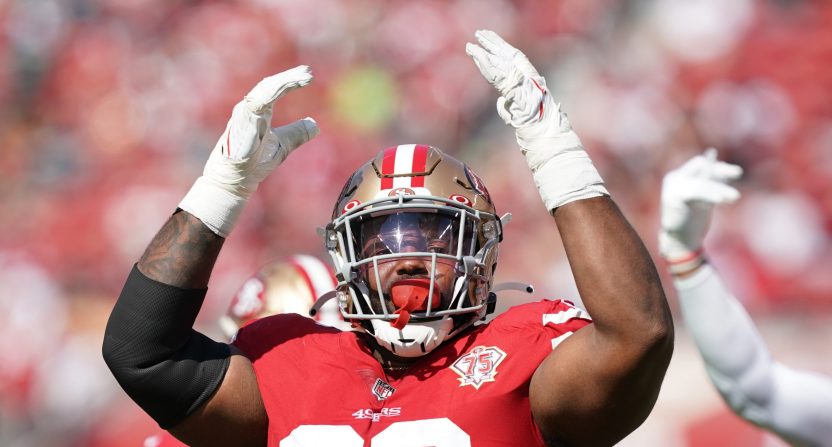 With their training camp just getting underway, the San Francisco 49ers are having their depth on the defensive line tested. Defensive tackle Maurice Hurst, who signed with the 49ers ahead of the 2021 season, tore his biceps and will undergo surgery, likely ending his season before it began.

The news was announced by 49ers coach Kyle Shanahan and reported by Matt Maiocco of NBC Sports Bay Area.

DT Mo Hurst tore his biceps and will undergo surgery. It is most likely a season-ender, #49ers coach Kyle Shanahan said.

Injuries have unfortunately plagued Hurst for much of his career, especially with the 49ers. He was drafted by the Las Vegas Raiders (then Oakland) in 2018 and generally did a good job staying on the field in the early part of his career. Hurst played in 13 games as a rookie in 2018 and all 16 in 2019. Then, things started to shift.

He played in only 11 games in 2020 and was waived by the Raiders after the season. Hurst signed with the 49ers ahead of the 2021 season but played in only two games and missed San Francisco’s entire postseason run.

Man what an awful string of luck for Hurst. https://t.co/fcvhCQeTa8

Once a 1st round talent coming out of Michigan, Maurice Hurst can't stay healthy. I feel for the guy! https://t.co/nlqt2pasER

The move also leaves the 49ers — who had arguably the NFL’s deepest group of defensive linemen entering training camp — suddenly thin at the position with less than two weeks before the preseason opener.

While being thin at any position is bad, being thin on the defensive line is particularly brutal, given the physical nature of the NFL trenches.

Don’t be surprised if the 49ers respond to Hurst’s injury by adding at least one tackle.