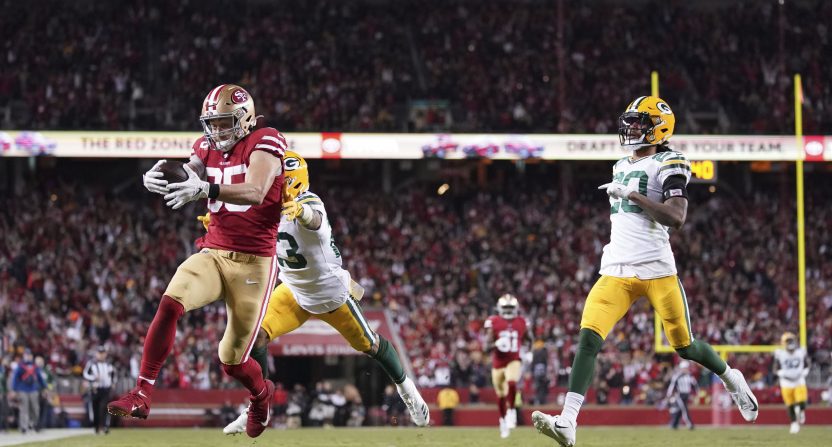 Just a year after going 4-12, the San Francisco 49ers are tied with the New England Patriots for the NFL’s best record at 10-1, and have the NFC’s best record by one game. And the 49ers put together arguably their most convincing victory of the season with a 37-8 beatdown of the Green Bay Packers (8-3) on Sunday Night Football.

The domination from San Francisco began on the game’s opening drive, when seemingly the entire 49ers defensive line crashed in on Aaron Rodgers and forced a fumble. Nick Bosa scooped up the football and returned it to the two-yard line.

San Francisco outscored the Packers 23-0 in the first half, and rookie wide receiver Deebo Samuel showed off his explosiveness with a 42-yard touchdown reception with a minute to go in the half.

After the Packers finally got on the board with a touchdown and two-point conversion in the third quarter, the 49ers responded with a touchdown just two plays later when Jimmy Garoppolo found tight end George Kittle for a 61-yard touchdown pass.

The 49ers put their fantastic defense on full display in this one, with their pass rush particularly giving Aaron Rodgers and the Green Bay offensive line hell. San Francisco sacked Rodgers five times, and held him to 104 passing yards on 33 attempts, to go with a 75.8 passer rating.

Entering tonight, Aaron Rodgers had never passed for fewer than 161 yards when attempting 30+ passes in his career.

Aaron Rodgers' 104 yards passing is the fewest since 1950 by a QB with 20+ completions pic.twitter.com/59NmAGZQdA

We knew the 49ers were good and that the defense was an elite unit, but this was the kind of all-around performance that will lead to more people buying into them as legitimate Super Bowl contenders. The offense mixed in some explosive plays, the running game was very effective as usual (22 carries, 112 yards, two touchdowns), and Jimmy Garoppolo was highly efficient (14-of-20, 253 yards, two touchdowns, no interceptions, 145.8 passer rating).

And the 49ers will certainly be prepared for playoff-level football when January comes around, thanks to an extremely difficult schedule to finish the regular season: at the Baltimore Ravens, at the New Orleans Saints, vs the Atlanta Falcons, vs the Los Angeles Rams, and at the Seattle Seahawks. It’s very possible the Week 17 game against the Seahawks is for the NFC West crown, and possibly for the top seed in the NFC. The Seahawks handed San Francisco their only loss of the season in Week 10.

As for the Packers, it’s concerning how badly they were outplayed in their past two road games (they lost 26-11 to the Los Angeles Chargers in Week 9), and their offensive line looks like a real problem (especially with right tackle Bryan Bulaga leaving Sunday night’s game due to injury). The loss also puts them into a tie with the Minnesota Vikings for first place in the NFC North. Any deep run in January for the Packers would likely require at least one game at Lambeau Field, so winning the division will be crucial to their chances.

The good news for the Packers is that they will be heavy favorites in all of their next three games: at the New York Giants, vs the Washington Redskins, and vs the Chicago Bears. All three of those games are must-wins for Green Bay.