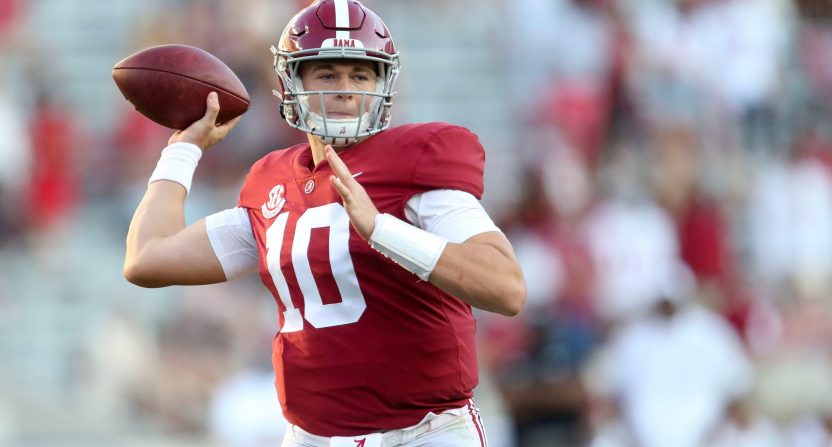 It’s been no secret that the San Francisco 49ers would be drafting a quarterback after trading three first-round picks to the Miami Dolphins to move up to the No. 3 pick. It’s just a matter of which quarterback: Ohio State’s Justin Fields, Alabama’s Mac Jones, or North Dakota State’s Trey Lance?

Well, NFL Network’s Ian Rapoport reports on Sunday night that the 49ers are deciding between Jones and Lance for the pick.

As the #49ers close in on their decision of which QB to take at No. 3, sources say they are down to two prospects — and the belief is those two are #Bama QB Mac Jones and #NDSU QB Trey Lance. Several sources say the focus does appear to have shifted to those two.

For all intents and purposes, the 2021 draft starts at the third pick, because everybody in the NFL knows that the Jacksonville Jaguars will select Clemson quarterback Trevor Lawrence at No. 1, and that the New York Jets will select BYU quarterback Zach Wilson at No. 2. We just haven’t known which quarterback will be taken, and that could impact other teams potentially wanting to trade up depending which quarterbacks are still on the board.

Weeks into the 2020 college football season, many evaluators viewed Fields as the “1B” option to Lawrence for the 2021 draft. Jones wasn’t even on the first-round radar (neither was Wilson!), and Lance had seen his perceived stock slide a bit (he only had one game in 2020, and it was a mediocre effort against Central Arkansas). Now, it appears that one of Jones and Lance will be third overall pick, and Fields won’t even be one of the first three quarterbacks taken. It’s entirely possible Fields won’t even be the fourth quarterback taking, especially if the rest of the league is thinking like the 49ers are with these prospects.

Fields’ slide is puzzling (and you have to wonder if it’s a bit too much recency bias, organizations overthinking this, or some other factor altogether), but clearly Kyle Shanahan and the 49ers are in love with Jones or Lance.

Jones put together a remarkable season at Alabama, throwing 41 touchdown passes and just four interceptions, with a 77.4 completion percentage and 11.7 passing yards per attempt. He’s also viewed as a highly intelligent quarterback that has blown away teams in interviews. He’s the quarterback that the 49ers have been most linked to following the trade, but there have still been skeptics due to questions about Jones’ physical tools compared to Fields and Lance.

Now, while Lance has those tools, he’s also been playing against FCS competition- and again, played just one game in the 2020 season. He’s viewed as a great *talent*, but potentially a pretty raw one that may take time. While he has star potential, Lance also feels like the with the highest bust potential of the top five quarterbacks.

The 49ers have likely known all along which quarterback they’re taking, and they surely have a lot of conviction in it. Or else you don’t sell the farm to move up for the pick. And while this is lying season in the NFL, there’s no reason for the 49ers to be going the smokescreen route since they’re essentially the first pick in the draft; they’re not trying to fool anybody.

So, assuming Rapoport is getting good information with this report (and it’s hard to imagine him putting this scoop out there unless he was certain he had good information), the 49ers will be drafting Jones or Lance with the No. 3 pick. DraftKings currently has Jones the favorite at -200, with Lance at +175. Fields has fallen to +500 after Rapoport’s tweet.