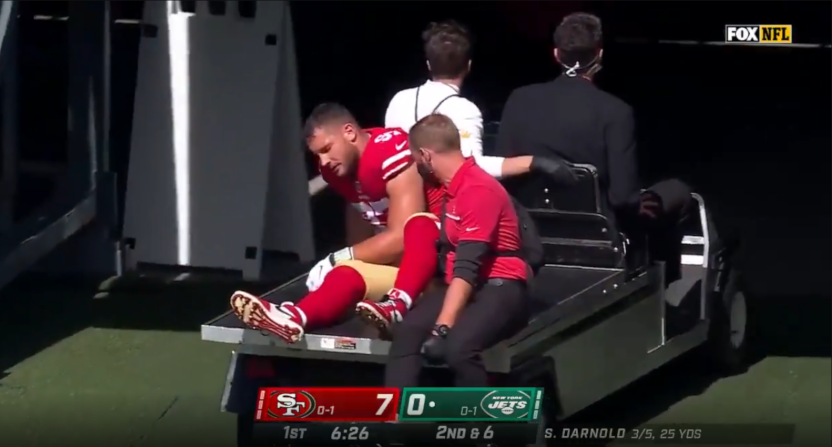 While the San Francisco 49ers picked up a 31-13 road win over the New York Jets Sunday and improved to 1-1 on the year, just about everything other than that result has gone poorly for them on this road trip. That game included a ton of injuries to 49ers’ stars, including quarterback Jimmy Garoppolo, running back Raheem Mostert, running back Tevin Coleman, defensive end Nick Bosa (seen above getting carted off Sunday), defensive tackle Solomon Thomas, and defensive tackle D.J. Jones. And while there were plenty of injuries around the NFL Sunday, the 49ers were particularly hard-hit there. Here’s a look at their injury list as of Monday afternoon, via David Lombardi of The Athletic:

And even some of those injuries proved hard to immediately evaluate. The team is staying at the Greenbrier Hotel and Resort in West Virginia this week before playing the Giants in New Jersey next Sunday, and they’d arranged for a MRI truck to meet them there, but that truck broke down.

True story: #49ers coach Kyle Shanahan said the team was planning to get an MRI truck to The Greenbrier in West Virginia, but the truck broke down. So the team is still waiting to get MRI results on Nick Bosa, Solomon Thomas, et al.

And that’s not even the first transportation issue the 49ers have faced this trip. They had planned to fly out of San Jose, but maintenance personnel hit their original plane on the runway, forcing them to relocate and fly on a different plane out of San Francisco (which created a six-hour delay):

Kyle Shanahan says the plane the #49ers were supposed to take to the East Coast got hit on the runway, leading to a 6-hour delay. Arrived at hotel at 4 a.m. Saturday.

They won a game yesterday, but apparently nothing else has gone right on this trip.

And they have some further concerns about playing another game at MetLife Stadium Sunday, as players and coaches expressed complaints about the surface there. Here’s more on that from Josh Dubow of The Associated Press:

The Niners were upset after the game because they felt the new turf at MetLife Stadium was especially sticky and might have contributed to the injuries.

They have to return to the same field next week to face the Giants and talked to the league about the situation. Shanahan said he hopes his players can get assurances of the safety of the field before returning.

“We have to come back here and play again on the same surface,” defensive lineman Arik Armstead said. “That’s anxiety provoking to see that happen and know that you have to deal with it again.”

So, apart from that win, this has definitely been a no-good, very-bad road trip for them.