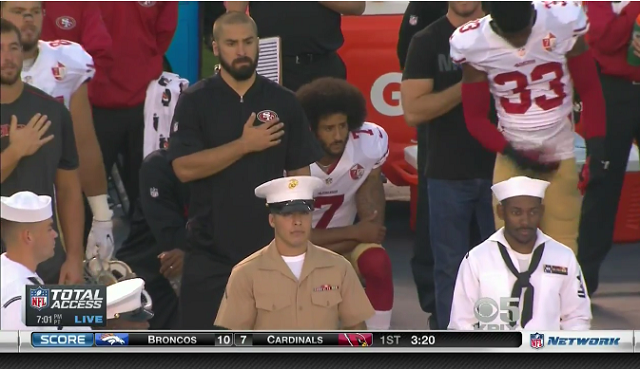 San Francisco 49ers quarterback Colin Kaepernick has created quite a stir around the football world and the nation extending beyond it with his decision to protest what he calls the oppression of the African-American community in the Uniterd States. Choosing to sit during the performance of the national anthem is his way of standing up for what he believes in, and he is not alone.

Now that it has become a national story, if not for the reasons Kaepernick intended, you know every camera on during a national anthem performance is going to lock in on the 49ers quarterback. That was the case Thursday night in San Diego, as the San Diego Chargers were hosting a military appreciation night in the preseason finale against the 49ers. This provided us with an obligatory shot of Kaepernick taking a knee while the anthem was being performed and members of the Navy and Marines stand just yards away holding a giant flag on the field.

But did you notice something in that shot? Kaepernick was not alone in taking a knee during the anthem. Though difficult to tell from the video, that is safety Eric Reid by his side.

Colin Kaepernick sat down. Eric Reid sits down next to him.

Colin Kaepernick and Eric Reid took a seat among all the #49ers on the sideline. They got up after the anthem and embraced.

While Kaepernick is hoping to get discussions going about the social and political issues he is focused on, he is not trying to sway anyone to join him. Reid made this decision on his own.

“This isn’t something I’m going to ask other people to put their necks out for what I’m doing,” Kaepernick said, according to CSN Bay Area. “If they agree with me and feel strongly about it, then by all means, I hope they stand with me. But I’m not going to go and try to recruit people and be like, “Hey, come do this with me” because I know the consequences that come with that, and they need to make that decision for themselves.”

Much of this protest news has been slanted toward suggesting Kaepernick was disrespecting the armed forces who have fought so hard for this country, despite the troops fighting specifically for his right to do just what he has chosen to do. Regardless, with San Diego being a good military town and with the salute to the military going on, the attention once again focused on Kaepernick and how he would respond as military members were being recognized.

Colin Kaepernick standing and applauding as military, veterans in crowd are honored during break in play.

It’s almost as if Kaepernick was never protesting the military in the first place. Crazy, right?