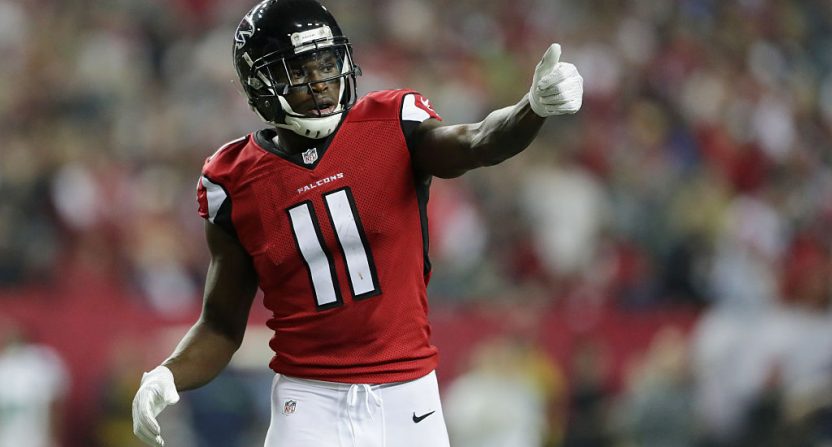 Super Bowl LI is set for Sunday, with the New England Patriots trying to regain their dynastic control of the Lombardi Trophy and the Atlanta Falcons attempting to win a championship for the first time in franchise history. In sports terms, everything is at stake. And given the way both teams navigated their respective 2016 seasons, near-flawless execution will be required for either to win.

The Falcons and Patriots are well-matched teams with much in common — so much so that each of their paths to victory nearly seamlessly overlap where strategy is concerned. Here are the five keys to a Super Bowl win and how each one applies to both New England and Atlanta on Sunday.

Patriots head coach Bill Belichick excels in many areas, one of which is his ability to game-plan around eliminating his opponents’ top player. For the Falcons. that is wide receiver Julio Jones. Jones averaged a league-leading 100.6 yards per game in the regular season (and had 1,409 receiving yards overall) and scored six touchdowns. But his postseason performance has been even more eye-opening: 247 yards and three touchdowns on 15 receptions through two games.

But given Belichick’s prime strategy, Jones may be off the table, seeing double- and triple-coverage that will have Falcons quarterback Matt Ryan frequently having to look elsewhere. This is a wise move by the Patriots, to be certain, and one they can pull off. Shutting down Jones-style receivers has been the Patriots’ bread-and-butter. But it is also one that the Falcons can prepare for and, ultimately, accept (albeit begrudgingly).

But given Belichick’s prime strategy, Jones may be off the table, seeing double- and triple-coverage that will have Falcons quarterback Matt Ryan frequently having to look elsewhere. This is a wise move by the Patriots, to be certain, and one they can pull off. Shutting down Jones-style receivers has been the Patriots’ bread-and-butter. But it is also one that the Falcons can prepare for and, ultimately, accept (albeit begrudgingly).

A Jones shut-down is not something the Falcons are unfamiliar with; it happened numerous times this year, including a one-catch, 16-yard day in Week 3 (a win over the New Orleans Saints), a two-catch, 29 yard performance in Week 5 (a win over the Denver Broncos) and in Week 12 against the Arizona Cardinals (four catches, 35 yards, and yet another win) to name three.

This is a team that spreads the ball around in the passing game and also has a top-five rushing offense. The Falcons have repeatedly won — and scored no fewer than 23 points in the three aforementioned examples — in games which Jones has been defensively schemed into a non-factor. Atlanta knows what they have to prepare for against Belichick’s signature strategy.

The Falcons’ greatest offensive strength, as mentioned above, is its variety and the multitude of players who can help the team reach the end zone. It’s not just Jones who can shine in Kyle Shanahan’s offense, especially with the help of a strong offensive line (the only one boasting the same five starters all year long among all 32 clubs) and an MVP-caliber quarterback in Ryan.

Thus, the Falcons need to continue to employ what works. Getting conservative against Belichick’s defense will serve them no favors except to self-limit and thus hold themselves back. The Falcons cannot suddenly beat themselves in the game that matters most in the season.

2016 NFL Divisional Playoffs vs SEA: Matt Ryan and the Falcons capitalize on a 4th Quarter Drive with a TD pass to Mohamed Sanu @Mo_12_Sanu pic.twitter.com/l9Ok1ceasK

This means Ryan must continue to rely on the non-Jones players who have helped him throughout 2016: Mohamed Sanu, Taylor Gabriel, Devonta Freeman, Tevin Coleman and Levine Toilolo. The multi-pronged passing and rushing attacks must remain relatively unchanged. If it’s not broken, don’t fix it.

The Patriots are well-prepared for Atlanta’s offensive bag of tricks. There’s a whole season’s worth of tape that they have doubtlessly studied meticulously. The Patriots must continue to trust in their coverages that are designed to limit big plays, trust in their secondary, concede that there will be times the Falcons take advantage on offense and do what they do best: Limit teams to field goals (or nothing) once they reach the red zone.

New England has the top scoring defense in the league, allowing only 250 points this year and giving up touchdowns only 50 percent of the time when opponents are in the red zone. Atlanta’s offense may have many facets, but keeping it out the end zone is a task the Patriots can take on with confidence.

There’s no question that the best way to stop quarterbacks the caliber of Matt Ryan and Tom Brady is to make it as difficult as possible for them to complete an accurate pass. Doing so will be difficult, though not so much to render it a pipe dream.

According to Pro Football Focus (via CBS Sports), Brady has a regular-season passer rating of 84.9 when pressured this year, while Ryan’s is 87.2, ranking them fifth and third, respectively, when passing under pressure. But that includes all pressure each quarterback has seen this year, from traditional three- and four-man rushes as well as blitzing.

When it comes to both Brady and Ryan, the blitz is not the way to go. Ryan has so many weapons at his disposal that sending more than four pass-rushers, leaving receivers single-covered and an option often completely uncovered, only plays to Ryan’s strengths.

Brady, too, has been sharper against blitzing defenses rather than three- and four-man rushes. As Bleacher Report’s Brad Gagnon pointed out, defeating Brady using pressure equals situations like last year’s AFC Championship Game loss to the Denver Broncos, in which Denver brought pressure 49 percent of the time but blitzed only 16 percent of plays. It also led to the New York Giants’ two Super Bowl wins over Brady’s Patriots. Brady, again, was pressured nearly half of the time but only 25 of 50 percent of that came via the blitz.

That Atlanta pressure will come primarily from linebacker Vic Beasley, who had 15.5 sacks in the regular season but none so far in the playoffs. Still, at this point Beasley’s postseason seems more like a slump than a sign that offensive coordinators and line coaches have him figured out. Given that the Falcons often prefer a straightforward pass-rush and are well aware that Brady is dangerous and not in danger when blitzed and a Beasley-led attack should be on the Patriots’ radar.

The same can be said for New England’s defense, one which had 34 sacks in the regular season and did so without a breakout pass-rusher like Beasley. The Patriots will also have to rely on three- and four-man rushes beating out Atlanta’s offensive line and reaching Ryan, because blitzing in this game will also be an unwise strategy for their defense.

The Patriots have long focused on the importance of special teams and how critical plays made during the kicking portion of the game can change its entire complexion. At the same time, the Falcons have shown some weakness in this phase of the competition, particularly when they are being fooled.

That’s not just the fake-out game either, though the Falcons did fall for a fake punt against the Kansas City Chiefs late in the season that led to a 55-yard Albert Wilson touchdown. There’s also the Patriots’ continued plumbing of obscure football rules, such as their attempt to break out the drop kick in 2015. And don’t think Belichick and the Patriots have forgotten the opportunity — not taken, mind you — that the Baltimore Ravens had to attempt to a fair-catch kick against the San Francisco 49ers in the Super Bowl in 2013.

But the Falcons could also come away with takeaways in the return game. Patriots cornerback Cyrus Jones splits kick return duties with Danny Amendola and has fumbled five times this year. With offenses this potent, a special-teams turnover could easily swing the momentum to or from either team. The same can also be said for the Patriots’ creative approaches to special-teams plays.