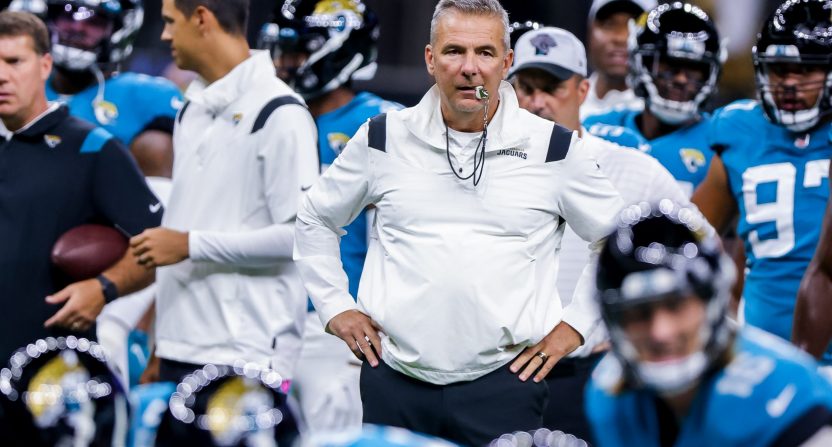 Look, we’re all thinking it, right? Given the concerns that many experts had when he was hired, coupled with all the rumors circulating about his inability to adjust to the NFL, and including how seriously bad the Jacksonville Jaguars looked on Sunday, we’re all wondering exactly how long Urban Meyer is going to stick around. Heck, we’re all wondering if he’s even going to make it through the 2021-2022 NFL season.

Some, like Dan Le Batard, are outright rooting for this misery to carry on for as long as possible.

Deep within, in a place long dormant, something visceral stirs, filled with acid and contempt. I wish to be better than rooting for the failure/misery of others, but I can’t keep it down: I’m rooting for Urban Meyer to feel like this on Sundays for as long as time remains — Dan

Whether Meyer has another health scare or simply decides to pull a Bobby Petrino, let’s speculate about where the mercurial head coach might be coaching by the time we get to September 2022.

What does it mean that Meyer’s current job, which he is literally one game into, seems like the least likely one he’ll have a year from now? But the truth is that all signs are pointing to the fact that Meyer isn’t made for the pro game. He’s a head coach who needs to feel in control, needs to be able to push players around and demands absolutes from everyone around him. That’s just not how NFL players work and it’s not what they usually respond to.

“You can’t freak out about preseason games and belittle your coaches — on a staff you handpicked — every time things don’t go your way,” a source told CBS Sports. “It’s not going to work here.”

Plus, this is a guy who is a near-c0nstant winner and who absolutely despises losing. He’s almost certainly going to coach a team that goes 3-13 or 4-12 this season. How is a guy like this going to deal with that, not to mention the strong possibility that next season will bring more of the same? The odds do not look good here.

Texas is very much not back once again and if we know anything about the people in charge in Austin it’s that they will do whatever it takes to finally, officially, seriously get “back.” Given that the football program will be joining the SEC in a couple of years, it is paramount for the Longhorns to come out guns blazing in order to compete with the likes of Alabama, Georgia, Florida, and, certainly, Texas A&M. Do not put it past the boosters over there to throw everything they’ve got a Meyer to come right away and get the program in shape for a stellar SEC debut.

Not to mention that Meyer already talked to UT about the job, ultimately turning it down to pursue the NFL. So we know the interest is there on both sides.

Everyone is talkin’ bout the Noles but not in a good way. FSU’s fortunes have faded in recent years and the once-proud program now finds itself losing to the likes of Jacksonville State and competing for also-ran status in the ACC. That is simply not good enough for the FSU faithful, who will demand a return to excellence very soon. Urban knows how to win in the state of Florida (at least in college) and he could definitely turn FSU back into a powerhouse to compete with Clemson in the ACC and get back in the CFP picture. And naturally, there have been rumors of overtures in the past.

A once-great powerhouse in need of new leadership. A proven winner at multiple college football powerhouses across the nation. A conference that is ripe to be dominated by the right program. There might not be a better fit for Meyer to immediately jump ship and find comfort in than USC, which he once called “an elite, elite job.” The “obscurity” of the Pac-12 gives Meyer the chance to step back from the harshness of the NFL limelight and regain the power and structure he craves.

Plus, everyone seems to already think this is going to happen.

How many #USC boosters have reached out to #Urban Meyer’s agent today?#Allofthem

While we might consider that Meyer will want to run from the NFL to find comfort in the college football ranks, it’s also entirely possible that the experience of this season will be so soul-crushing that Meyer will simply want to disappear for a little bit. That or he might return to the TV world where he would be heartily welcomed back by Fox Sports, Big Ten Network, or any of the major players.

When it comes to Urban Meyer, we don’t know what the future might hold. But we all seem pretty sure that the future will arrive much sooner than it would for most other coaches.