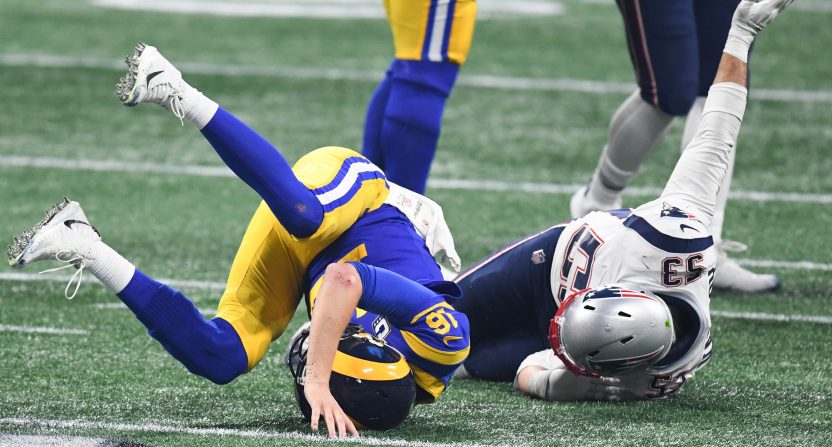 The Rams-Patriots Super Bowl LIII matchup seemed to have everything going for it. Bill Belichick and Tom Brady going against Sean McVay and Jared Goff presented the possible passing of the torch from one great NFL dynasty to the next. Two great offenses, two great coaches, two great quarterbacks – there was no way this game could be a dud.

Not only was it a dud, though. It was a dud of epic proportions. They should stick the original recording of Super Bowl LIII in Al Capone’s vault just so Geraldo Rivera can find it and disappoint America all over again.

Super Bowl LIII proved to be not just one of the worst Super Bowls of all-time, but the worst of them all.

And that’s no hot take. Yes, we’ve seen some colossally bad Super Bowls in years past. The first 35 years of the Super Bowl is filled with a variety of clunkers, letdowns, and blowouts. But Super Bowl LIII stands above the rest as an awful, awful football game.

Here are five reasons why…

Super Bowl LIII was under a cloud thanks to perhaps the most egregious no-call in NFL history. The Rams advanced past the Saints thanks in large part to an obvious pass interference/helmet-to-helmet penalty not being called on Nickell Robey-Coleman in the final two minutes of the NFC Championship Game. Had a flag been thrown, the Saints were a chip shot field goal away from the Super Bowl. Of course, there was no flag, and the Rams won in overtime. The NFL only exacerbated the issue by not even addressing the blunder publicly until Roger Goodell’s Super Bowl week press conference.

New Orleans protested the Super Bowl by doing what they do best – throwing a party. Super Bowl audience numbers in New Orleans were down by 51% compared to last year’s game and the lowest of any major market in the country.

WHO DAT? New Orleans Saints fans hold a Super Bowl boycott party in protest of the team losing to the Los Angeles Rams in the NFC Championship game over a controversial call. https://t.co/33STMDnqsH pic.twitter.com/WeBVzalMzJ

As fate would have it, all those protesting Saints fans were the real winners because they didn’t have to sit through Super Bowl LIII.

Imagine taking the over bet at 56 points and losing out by 40 points! Instead of the shootout we were expecting, Super Bowl LIII was the lowest scoring Super Bowl in history, “besting” Super Bowl VII when the undefeated Dolphins defeated the Redskins by a score of 14-7.

In a game featuring two of football’s most high-powered offenses, there was a whopping one play ran in either team’s red zone the entire night. One. Play. And it was a two yard touchdown run by Sony Michel, the only touchdown of the game.

And while some might praise the return of defensive competence to the sport after we saw scorelines like 54-51 earlier this season, neither one of these teams will be confused with the Steel Curtain anytime soon. This was just bad football all the way around. Just watch the two interceptions by Brady and Goff that had no business being thrown at all.

Tom Brady throws an interception on the first drive of the game #SuperBowl pic.twitter.com/a07YYqSnHz

There were times where viewers had to be asking themselves if they were watching the fourth week of the preseason instead of the Super Bowl itself.

Someone had to win this game though, and much to the chagrin of most of America (at least outside New England and New Orleans) that was the Patriots, who managed to play slightly less terrible football than the Rams did during Super Bowl LIII. Los Angeles’ performance deserves special recognition as one of the biggest eggs laid we’ve seen in a championship game in some time.

For as balleyhooed as Sean McVay is as an offensive genius, his team was completely shut down by a Patriots defense that ranked 21st in the NFL this season. The Rams went 3-13 on third down, punted nine times, were called for nine penalties, and Jared Goff was sacked four times. None of the Rams’ star players produced – Goff was doing his best Blake Bortles impression, Todd Gurley disappeared, CJ Anderson was ineffective, and the offense sputtered all night long. Punter Johnny Hekker was the MVP of the team, setting a Super Bowl record for longest punt. When that’s your highlight, something has gone definitely wrong.

This was so bad for LA that one wonders what the hangover will be for next season and whether other NFL teams are regretting barking up the McVay coaching tree for their own hires.

What was almost as insufferable as the game was the Patriots’ reaction to winning it. Somehow, the five-time Super Bowl champions consistently played the underdog card heading into the game. Brady, Belichick and company tried their best to convince America that the greatest dynasty in NFL history was a plucky underdog that nobody believed in. And they rubbed everyone’s nose in it after the game, too.

I respect the hell out of Jason McCourty, as a new Super Bowl Champ, to tell everyone in the media that they are dummies and wrong pic.twitter.com/lWNJTU1r62

Maybe you can respect the fact that a team that has won as much as the Patriots has to do something to create adversity, even if it’s a Jordanesque fabrication of doubters and haters. Sure there may have been a voice here and there that said the Patriots’ run was over, but it’s not like there was this wave of national momentum demanding that the team enter rebuilding mode. It’s bad enough seeing the Patriots win their sixth Super Bowl this century, it’s even worse watching them trying to play this Cinderella card from out of nowhere.

Even if the Super Bowl is a bad game, at least folks around the country can count on the halftime show and the commercials to get them through. After all, there are millions of people that watch the Super Bowl for those things first and for the football second. Unfortunately, they were let down as well. Maroon 5’s halftime show was almost universally panned as one of the worst of the modern era. And the commercials weren’t much to write home about either. When the biggest talking point coming out of the Super Bowl is corn syrup, you know it was just not a good night for anybody.