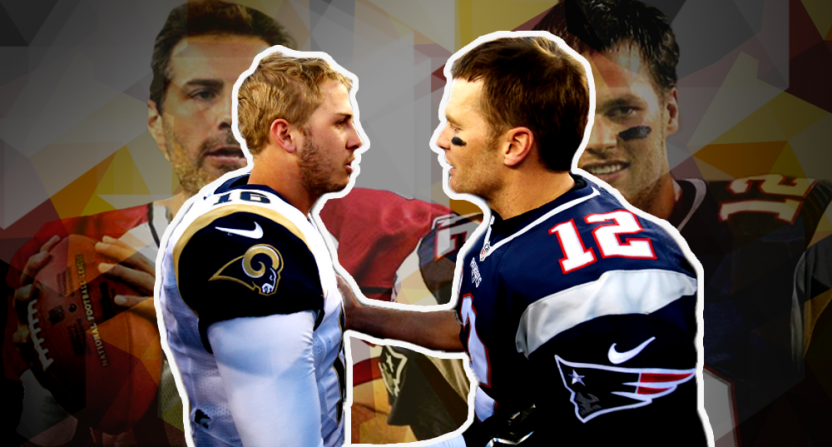 A Super Bowl showdown between the Rams and Patriots. One team enters as a seemingly unstoppable machine. The other team doesn’t seem to stand a chance. That might sound familiar, but then again it all played out a little differently in 2002. In fact, a whole lot of things are very different in the 17 years since. But now that the Rams and Patriots are getting back together in Super Bowl LIII, it’s worth a look back at exactly how different the trajectory of the two franchises has been ever since Super Bowl XXXVI.

There is an entire generation of NFL fans who only know the New England Patriots as the most dominant pro franchise in U.S. sports. They have never lived in a world where the Pats weren’t a yearly threat to make it to the Super Bowl (and probably win it). For us old folk, we remember when the Patriots were, for the most part, a pretty mediocre franchise. Sure they had some good seasons here and there, but more often than not they had a losing record and even when they did make it to the Super Bowl they always seemed to get beat pretty good.

But this was the year it all changed for good. Tom Brady and Bill Belichick led the Pats to an upset win over The Greatest Show on Turf. Two years later they were back in the Super Bowl to win it again. And the same thing the next season. They spend a few years in the wilderness, losing to the Giants twice in the big game, before returning to form in recent years. They’re now in their fourth Super Bowl in five seasons, hoping to win their third in that run. Overall during this run, they’ve gone to 13 AFC Championships and nine Super Bowls, winning six (so far). The NFL has never seen anything like the Patriots of the 21st Century and every time we think it’s over they return to the promised land to make us wonder why we ever doubted Brady & Belichick.

While the intervening time between these two Super Bowls has been heaven for the Patriots, it was fairly hellish for the Rams. The Greatest Show on Turf fell apart fairly quickly following that game. The magic ran out on Kurt Warner two years later and he was run out of town in favor of Marc Bulger. The team returned to the playoffs in 2003 and 2004 but only managed to win one game in that time. After that, the bottom fell out and the Rams quickly turned into the worst franchise in the NFL. They officially bottomed out between 2007 and 2009 when they posted consecutive 3-13, 2-14, and 1-15 records. They briefly got back on track in 2010 but returned to the cellar in 2011 with a 2-14 record. Then the team hovered in mediocrity, winning six or seven games in each of the next four seasons.

And then the team left St. Louis.  The Rams, who had left Southern California for St. Louis in 1995, decided to head back. Owner Stan Kroenke burned all the bridges on the way out of town (and the NFL helped him do it) and the franchise once again became the Los Angeles Rams in 2016. After one more piddling season, the team started to turn things around in 2017, making the playoffs for the first time since 2004. And now, a year later, here they are.

The Patriots might be known for the holy trinity of Brady, Belichick, and Bob Kraft, but they’ve gotten a lot of help along the way. While there are plenty of Patriots players who stuck around long enough to rack up multiple Super Bowl rings (Gronk comes to mind), there have also been a ton of one-year additions and crafty veterans who have come and gone, adding their little bit to the dynasty before moving in.

In fact, according to USA Today, 248 different players have earned a Super Bowl ring as part of the New England Patriots between Super Bowl XXXVI and the team’s most recent win in 2017 (LI). That also includes practice squad players but, hey, who are you to say they didn’t do their part?

Just to put that in perspective, the second-highest total number of players for a franchise over the same stretch is 107 for the Pittsburgh Steelers in the 1970s.

The Hall-of-Fame Gained a Few Members

Tom Brady and Bill Belichick are obvious shoo-ins for the Hall of Fame one day (if they ever retire) but Super Bowl XXXVI is notable for including a whole bunch of Hall-of-Famers who have entered the Hall in the years since. That St. Louis Rams team was particularly loaded and has since put quarterback Kurt Warner, running back Marshall Faulk, offensive tackle Orlando Pace, and cornerback/safety Aeneas Williams in the HOF.

Meanwhile, the Patriots haven’t put anyone in yet but we know what’s coming. Along with Brady, it’s likely that linebacker Tedy Bruschi, kicker Adam Vinatieri, defensive end Richard Seymour, and linebacker Willie McGinest could all join him in the Hall eventually as well. And while Belichick is going to go in, he might also be joined by owner Robert Kraft in some capacity, too.

Back in 2001, Tom Brady was just a sixth-round draft filling in for an injured Drew Bledsoe and riding out what was supposed to be another down year for the franchise. By the time it was over he’d led the Patriots to their first Super Bowl victory, dethroned Bledsoe as the starter, and waged war on the NFL record books ever since. It’s wild to think of Tom Brady as a plucky underdog but that’s exactly what he was in Super Bowl XXXVI. Whereas the Patriots have been trying to play the underdog role in this year’s playoff run, they legitimately were one that year. Very few people expected them to make the Super Bowl and even fewer expected them to win it. These days, it’s a bit different.

And then there’s Bill Belichick. His first head coaching stint with the Cleveland Browns had been a disappointment. But he repaired his reputation enough that the Jets and Patriots basically had a bidding war for his services (even if the Jets didn’t know) and Belichick was hoping this time it would work out better. It did. By his second season with the Pats he’d won the Super Bowl, he won four more in the years since, and his team hasn’t won less than 10 games in a season since 2002. There’s no question he’s the best NFL coach of the last 30 years and really the only question left is whether or not he’s the best NFL coach of all time.