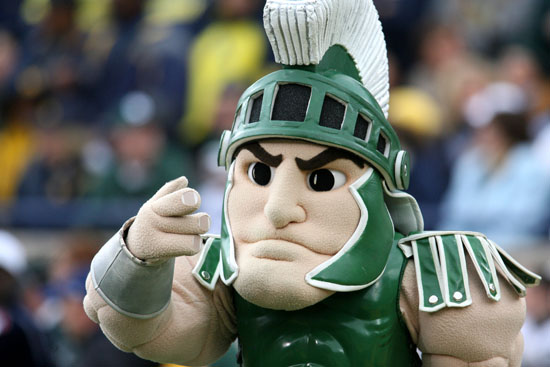 The results of the NFL Draft don’t really start to make sense for at least a few seasons when we can truly know if the No. 1 pick is a bust and that random guy selected in the sixth round somehow turned into an All-Pro. That won’t stop people from forming narratives and presumptive hot takes about who won and who lost, not just NFL teams but college football teams as well.

College football fans love to use the NFL Draft as a measuring stick and bragging rights when it comes to their schools putting players in the first round and getting guys drafted on the regular. Some schools have gotten so good at it that it seems like a foregone conclusion that you’ll hear their name mentioned once, twice, or possibly ten times throughout the weekend. Other schools hold out hope to hear that one of their players has been selected each and every year. Depending on their rate of success, certain streaks start to develop over time and those streaks become rallying cries in recruiting and fanbase taunting.

As the 2018 NFL Draft approaches, let’s look at 10 draft-day streaks that might be in serious jeopardy for some schools.

Michigan State Drafts With At Least One Player Selected: 77 Years

Only USC and Michigan (79 years) have longer streaks that Michigan State when it comes to putting at least one player in the NFL Draft each season. That streak is in serious jeopardy in 2018 as the senior class lacked any real stars and only one player was invited to the NFL Combine (center Brian Allen). Running back Gerald Holmes, linebacker Chris Frey, defensive end Demetrius Cooper, and kicker Brett Scanlon are all eligible to be drafted as well, but none of them seem to be locks to hear their names called. Allen is their only real hope and Mel Kiper says he could go as high as the fourth round or not be selected at all.

It’s been a good run for the Aggies, considering that they didn’t put a player in the first round for seven years before 2011 when Von Miller was selected by the Denver Broncos. Since then, they’ve had at least one guy in the opening road for seven-consecutive years. Extending the streak to eight years will rest on the shoulders of wide receiver Christian Kirk, who has seen his stock swing between the first and second round in recent mocks. In fact, most of the big mock drafts have him firmly in the second round and Kirk himself has said he’ll watch the draft at home instead of attending. It’s not the end of the world for TAMU, but it does feel like a bit of a demarcation line officially ending the Kevin Sumlin Experience.

Clemson will not have a player selected in the 1st round of the NFL Draft for the first time since 2012. That’s probably bad news for the rest of college football.

The Clemson Tigers have been one of the dominant college football programs of the last five years and that’s true in the NFL Draft as well. The school has had at least five players selected in each of the last four drafts and has gotten a player to go in the first round in five-consecutive seasons as well. That second streak may end in 2018. Not because Clemson doesn’t have the athletes, but because the guys expected to go early (Christian Wilkins, Clelin Ferrell) decided to return to school, making this a very good problem for Clemson to have. That leaves wideout Deon Cain as the best-available Clemson player in the draft, but he doesn’t show up anywhere near the first round of any reputable mock draft.

Years Since Syracuse Went Two-Consecutive Drafts Without a Pick: 69 Years

The Syracuse football program is in the midst of what feels like a perpetual rebuild and part of that is trying to get more players drafted consistently. After putting at least one player in the NFL Draft every season between 1976 through 2007, the program has sputtered in recent years, going draft-less in 2008, 2015, and 2017.  In fact, the only Syracuse player to get drafted in the last four years is a punter (Riley Dixon). To drive home the draft drought, there’s a decent chance SU won’t get a player’s name called this year, making it the first time the school has gone consecutive years without a pick since way back in 1949. Their only hope appears to be wide receiver Steve Ishmael, who is considered a longshot for a seventh-round selection right now.

Consecutive Years Where No. 23 Pick Came From SEC: Five Years

This one is a bit arbitrary considering there’s no way to predict this correctly. It mostly serves as a validation that the SEC has so many players going in the first round. Over the past five years, the 23rd pick in the draft has included Florida DT Sharrif Floyd, Missouri DE Shane Ray, and Ole Miss WR Laquon Treadwell. This year, the New England Patriots have the pick, and while there are some mock drafts that predict this trend to continue (Alabama linebacker Rashaan Evans comes up), many others think the Pats could end up taking UCLA quarterback Josh Rosen, Maryland wide receiver D.J. Moore, Louisville cornerback Jaire Alexander, or UCLA offensive tackle Kolton Miller instead.

Years Since the Saints and Panthers Have Picked an SEC Player in First Round: Six Years

Another random and arbitrary streak, it’s significant if only because the guys they did take the last time they went with one. In 2011, the Panthers’ took Auburn QB Cam Newton and the Saints took Alabama RB Mark Ingram. Again, it’s entirely possible neither team will go SEC but with the No. 24 pick (Panthers) and No. 27 pick (Saints), it seems like sooner or later one of them is going to break the streak (assuming they don’t trade picks, which some expect the Saints to do).

There comes a time when you have to fall on the sword— Doing more work on Frank Ragnow tonight. I’m too low on him. Better to admit it, correct it and move on.

With all this SEC hubbub it seems a bit wild that the Arkansas Razorbacks haven’t had a player selected in the first round in nine years (Good job, good effort, Bielema). Odds are good the streak ends in 2018 with center Frank Ragnow. Depending on the mock draft, this big hoss could go to the Cincinnati Bengals at No. 21, New Orleans Saints at No. 27, or the Minnesota Vikings at No. 30. The Hogs might be in the midst of a rebuild, but it’ll be nice to be able to point to a first-rounder as proof of their potential.