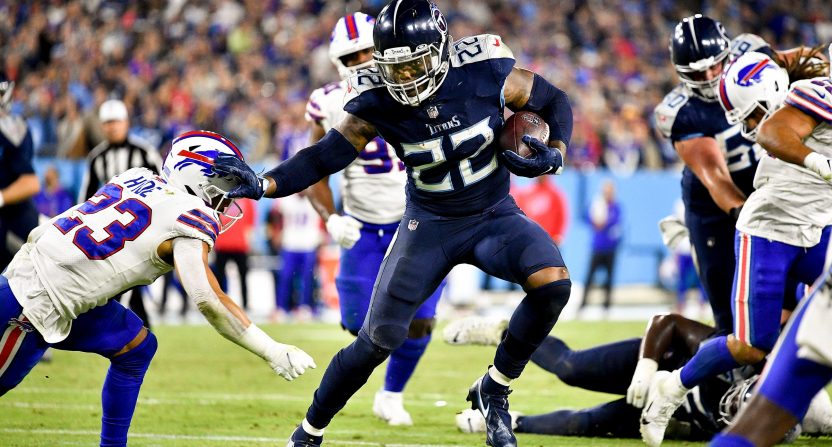 The Tennessee Titans beat the Buffalo Bills 34-31 in a fantastic Monday Night Football game. Here are our main takeaways from the Titans’ victory:

This incredible game featured an appropriately incredible finish. After Derrick Henry scored the go-ahead touchdown for the Titans (more on that later) with just over three minutes remaining, Buffalo kick returner Isaiah McKenzie thought he had a 101-yard touchdown return to give the Bills the lead back. But the Bills were called for holding, wiping out the touchdown.

Isaiah McKenzie thought he had a go-ahead 101-yard kick return touchdown for the Bills.

Wiped out by a holding call. 😬 pic.twitter.com/7zMtqNGbet

The Bills were still able to drive down the field into the red zone, and Josh Allen put together an incredible effort to almost get a first down on this crazy run:

Trailing by three on 4th-and-1 at the three-yard line with 22 seconds left, Bills head coach Sean McDermott elected to go for it. But Allen slipped and was stop short by the Tennessee defense, giving the Titans a terrific win.

It was the right call by McDermott to go for the first down and the win, and Allen probably converts that sneak nine times out of 10.

Henry had 20 carries for 143 yards and three touchdowns, with the first touchdown resulting in the fastest speed by any ball-carrier in the NFL this season, the second touchdown giving the Titans the lead in the third quarter, and the third touchdown serving as the game-winner. He’s just an unbelievable talent with his absurd size-and-speed combo.

This is ridiculous speed at his size. 🔥💪🏈 pic.twitter.com/BTLVUZSUuJ

This game featured plenty of amazing plays, and Jones provided one of those with a ridiculous catch after the ball bounced off Buffalo cornerback Micah Hyde’s helmet in the second quarter.

Incredible catch by Julio Jones after it bounced off the defender's helmet (yes, this catch counted)! 🏈 pic.twitter.com/u4d7EWkiq8

Here’s how that incredible and hilarious Julio Jones catch looked with the replay angles. pic.twitter.com/6bQ5klpEBt

Unfortunately, Jones exited in the fourth quarter with a hamstring injury. He finished with three receptions for 59 yards and has only topped 60 yards in one game this season, his first with Tennessee.

Allen was sensational yet again, completing 35-of-47 passes for 353 yards, three touchdowns, and one interception (which was when he was hit while throwing).

Josh Allen and Stefon Diggs are a lethal duo!

He even caught a two-point conversion.

The Bills pulled out the tricks on the 2-point conversion! This time, Josh Allen is the receiver and (tight end) Dawson Knox is the quarterback. 🪄

Taylor Lewan was carted off on a backboard

It was a scary scene as the longtime Tennessee left tackle was down for a while before being carted off the field, but he gave a thumbs up to the crowd and reportedly had movement in all extremities. He was evaluated for a concussion.

Titans OL Taylor Lewan was immobilized and carted off the field Monday, but has movement in all extremities and is being evaluated for a concussion https://t.co/WrjFOyRM0h pic.twitter.com/lnJuncZ3Xd

They also finish off their season with home games against the Atlanta Falcons (2-3) and Jets.

The Bills still have a strong chance to be the AFC’s No. 1 seed, and they lead the NFL in point differential (+105) by a large gap (the 6-0 Arizona Cardinals are next-best at +85, and the Baltimore Ravens are next-best in the AFC at +47).

Tennessee (4-2) follows this game up by getting to host the Kansas City Chiefs in Week 7. No letdown in that schedule arrangement! But, if you have to play Patrick Mahomes, it might as well be at home and while riding high after just beating the Bills.

And it remains tough for the next month: at the Colts in Week 8, at the Los Angeles Rams (5-1) in Week 9, vs the New Orleans Saints in Week 10. The Titans finally get a break from the schedule makers with a home game vs the Houston Texans (1-5) in Week 11.

So, when you consider this upcoming schedule, it makes Monday night’s win look even better for the Titans.