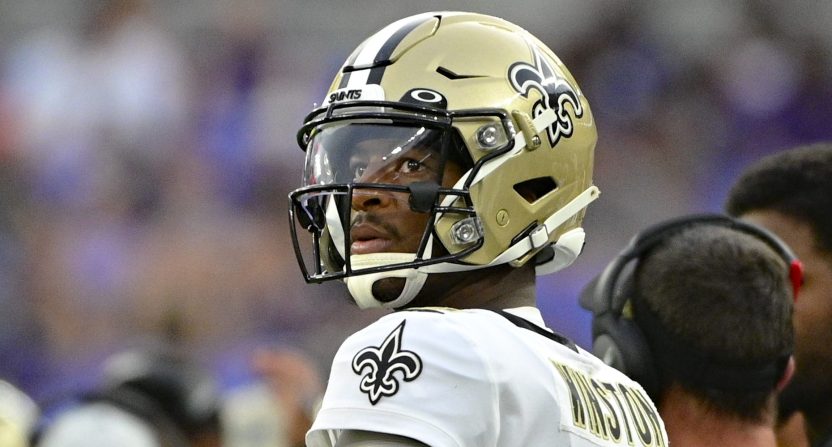 Jameis Winston’s football future starts now. After two humbling seasons, he might never have a better opportunity to rewrite the narrative of his career.

He’s not Drew Brees, but he doesn’t have to be. A good season with the New Orleans Saints probably will lead to a great payday next year. No more one-year deals as the most skilled backup in the league. Winston could cash in significantly.

Winston won the quarterback competition over Taysom Hill by posting the highest passer rating (124.8) in the NFC during the preseason. He averaged a gaudy 10 yards per pass and threw three touchdowns to one interception. Sure, they’re only exhibition games. But that potential is why Winston will be a name to watch when the Saints kick off against the Green Bay Packers in Jacksonville.

In the history of the NFL, only eight people have thrown for 5,000 yards. It takes rare talent to be a part of that fraternity. Some of the greatest players we’ve ever seen are on that list: Dan Marino, Tom Brady, Peyton Manning, and Brees. Winston is in that club. However, he’s the only one whose career as a starter subsequently came to a humiliating halt.

Winston’s unprecedented 2019 season seems like something out of a video game. He became the first player to throw for 30 touchdowns (33) and 30 interceptions (30). His final pass as a Tampa Bay Buccaneer was a pick-six in a season-ending overtime loss to the Atlanta Falcons.

Unfortunately for Winston, the embarrassment didn’t end there. After Tampa Bay let him walk as a free agent, he never got a serious offer to be a starter. He wound up taking a severe pay cut, going from $21 million his final season to a “paltry” one-year deal for $1.1 million in 2020. What was even worse? He watched his former team win the Super Bowl with Tom Brady.

That’s rough. Winston, however, has a chance to salvage some dignity. The Saints’ new starting quarterback is currently on a one-year, $5.5 million deal (worth up to $12 million in incentives). He’s positioning himself for a huge raise. With his passing skills and Sean Payton’s play-calling, he could have a very productive season. If that happens, the rich deal Winston didn’t get as a free agent in 2020 could emerge in 2022.

Winston would have leverage. That’s a great thing in a quarterback-needy league. The Saints could try to work out a long-term deal, or they could use the franchise tag to keep Winston for another season. The franchise tag (the average of the top-five highest salaries at the player’s position) for 2021 was $24 million.

But let’s say the Saints allow Winston to hit free agency. That’s a good option for him as well. He could pick his preferred destination, and he should be considerably more desirable than he was a few years ago.

The quarterback market in 2022 could potentially feature Aaron Rodgers and Deshaun Watson. Rodgers — who has expressed displeasure with Packers management — would command a ton of money, so there are salary cap considerations. Watson is facing legal trouble with 22 lawsuits accusing him sexual assault and inappropriate behavior. Assuming the Houston Texans trade Watson, they’re reportedly asking for three first-round picks. Watson also must agree to wave his no-trade clause.

What does this mean for Winston? If teams don’t land Rodgers or Watson, Winston might be a more realistic option. Quarterback-desperate teams like the Denver Broncos, Carolina Panthers, Philadelphia Eagles, Washington Football Team, and New York Giants should be interested. Also, possibly the Pittsburgh Steelers and Las Vegas Raiders. Ben Roethlisberger might retire, and Jon Gruden might tire of the serviceable but unspectacular Derek Carr.

Of course, we’re assuming a lot.

Winston must prove himself. His 30-interception season is a bit overstated. In his first three seasons with Tampa Bay, his interception percentage was 2.8, 3.2, and 2.5 respectively. Not great, but not horrendous. It’s only over his final two seasons that it got out of control: 3.7 and 4.8. Too often Winston tried to force plays that weren’t there in difficult situations. Eleven of his interceptions came on third down, and 10 were in the fourth quarter.

Winston spent last year as Brees’ understudy, presumably learning how to be better. It’s worth noting that Brees once led the NFL in interceptions too, throwing 19 in 2012. However, Brees didn’t have double-digit picks over his final four seasons. He had to be more careful as his arm strength waned.

With Winston, the New Orleans offense will look different. Payton has a quarterback who can stretch the field vertically. According to the NFL’s Next Gen Stats, Winston was second in the league with 10.5 air yards per attempt in 2019. Last season, Brees averaged 6.3 per pass, second-worst in the league. That difference will open up the offense.

The key question is: can Payton coach the recklessness out of Winston? He’s been plagued by turnover issues throughout his career. It’s a delicate balancing act, because Winston’s aggressiveness is what also makes him special.

It’s Winston’s time. Let’s see if he can make the most of it.