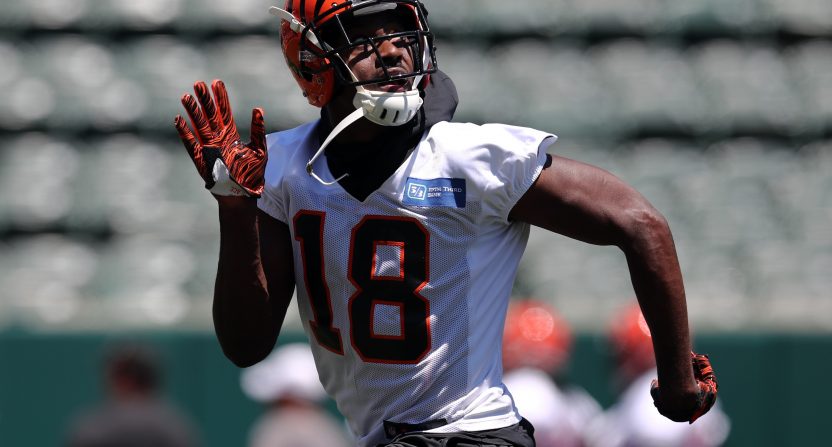 If the Bengals were hoping for a fresh start after 16 years of the Marvin Lewis regime, they didn’t get what they wanted today. That’s because on the first day of training camp, A.J. Green had to be carted off the field after suffering a leg injury.

A.J. Green went down during Bengals practice in Dayton, Ohio, with an apparent lower left leg injury, NFL Network’s James Palmer reported. Green was seen being tended to on a sideline bench before walking under his own power to a cart, per multiple reporters.

Fortunately, the early reports are about as good as could be hoped for under the circumstances for Cincinnati:

Based on the initial diagnosis, #Bengals WR AJ Green is believed to have suffered a sprained ankle, I’m told. They are hopeful, but he’s going to get an MRI to be sure. If that’s the case, expect serious caution throughout the preseason from Green and the team.

A sprained ankle in late July is something that definitely shouldn’t matter a whole lot for a player like Green. Week 1 is five weeks away for the Bengals, and it’s not like A.J. Green needs to really work on his post routes or timing with his quarterback (still, somehow, Andy Dalton.) There is a new coach, of course, but he attempted to keep panic to a minimum with his comments:

Bengals coach Zac Taylor downplayed the injury following practice, telling reporters, “I think we’ll let him get checked out. I don’t think anything that’s happened today is anything that… You don’t want to assume anything, but I think we’re going to be OK.”

Hopefully Green is fine, and hopefully there aren’t more stars that go down over the next few weeks of (for that caliber of player) meaningless practices ahead of meaningless preseason games. If a sprained ankle for Green is the worst thing that happens, that’s a good thing for players, teams, and fans alike.