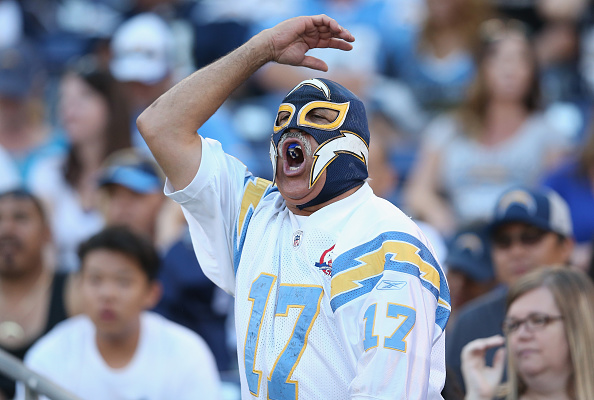 The San Diego Chargers are no more, as owner Dean Spanos is moving his NFL team 120 miles north to Los Angeles. That ends a nearly six-decade residency in San Diego. Here’s what you need to know about the 56-year run the Chargers had in “America’s Finest City.”

395: Games played at Qualcomm Stadium, which opened in 1967. The only active venue that has hosted more NFL games is Los Angeles Memorial Coliseum.

518: During their team in San Diego, the Chargers played more games (518) in the Pacific time zone than anyone else in NFL history.

37,416: That’s the total number of points scored in games involving the Chargers during their time in San Diego — the highest total in the league during that stretch of just over half a century. Only four teams scored more points and only three surrendered more.

88: That’s how many Chargers were elected to at least one Pro Bowl during their time in San Diego. Only 38 of them played defense.

12: Chargers linebacker Junior Seau is one of just six players ever to earn 12 Pro Bowl nods in one city.

11: That’s the total number of Hall of Famers who played for the Chargers in San Diego, but that includes Johnny Unitas, John Mackey, Larry Little and Deacon Jones, all of whom had mere cups of coffee with the team. The other seven — Seau, Dan Fouts, Kellen Winslow, Charlie Joiner, Fred Dean, Lance Alworth and Ron Mix — are real Chargers legends. And LaDainian Tomlinson will soon join them.

26: That’s how many times they were shut out in their 56 years in San Diego. During that stretch, only the Tampa Bay Buccaneers and Chicago Bears were blanked more.

17: By comparison, the defense pitched 17 shutouts.

38: Chargers games that went into overtime during their years in San Diego. They won just 15 of those.

45: The oldest San Diego Charger was kicker Ben Agajanian, who played for the team as a 45-year-old in 1964. Their oldest player during the modern era was 42-year-old Doug Flutie in 2004.

38: That’s the total number of starting quarterbacks they used in 56 years, although 97 players threw at least one pass for the team.

97: Quarterback Philip Rivers had a franchise-best 97 wins for the Chargers.

199: That’s the total number of games Seau started for the team, 14 more than Antonio hates and 23 more than Rivers.

0: Super Bowls won by the Chargers during their time in San Diego. Only six other teams have been active the entire Super Bowl era and haven’t won a Lombardi Trophy.

1: Championships won by the Chargers in San Diego. They beat the Boston Patriots 51-10 in the 1963 AFL title game.

11: Playoff wins by the Chargers. Among those teams that have been around since 1966 and haven’t won the Super Bowl, only the Detroit Lions and Arizona Cardinals have fewer playoff victories.

17: That’s the number of playoff appearances they made in 56 years.

25: That’s how many winning seasons they had in San Diego, compared to 23 losing seasons and eight .500 campaigns.