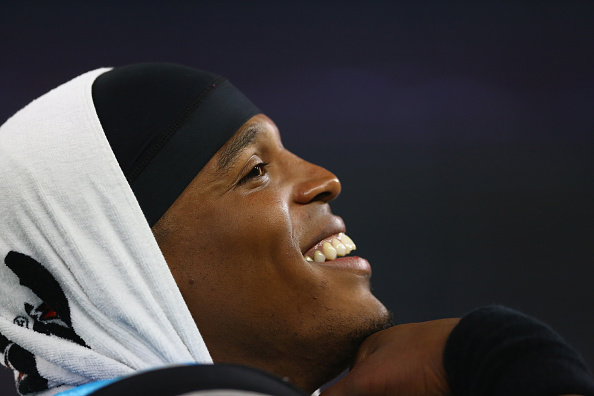 “I’m on somebody’s fantasy league, and I think it’s the man upstairs.”

On December 9, 2015, at half past noon, Cam Newton was on his way to work when his truck got hit by another motorist at one of the most dangerous intersections in the city of Charlotte. Newton’s truck flipped and rolled down the street.

Newton should have died.

“I’m looking at this truck like, ‘somebody is supposed to be dead.’ And I just can’t stop smiling because it’s like God had his hands on me, man.”

He suffered two transverse fractures in his back, sidelining him for one game—one game—as the Carolina Panthers fought for an NFC South title and the right to host a playoff game last year. The Panthers won their last four games of the 2014 season, three of which came after Newton’s injury, including two that he started. With a broken back. After an accident where his truck flipped over. And he should have died.

The Panthers’ 2014 season ended with a Divisional Round loss to the Seattle Seahawks, but for a team with seven wins that was, figuratively speaking, left for dead just a month earlier, it was an unquestionably satisfying end to the season. Just having Newton there, literally still alive, put a playoff loss to the eventual Super Bowl runners-up in understandable perspective, worthy of a smile.

This season, Newton hasn’t stopped grinning all year, with 12 victories in as many games and a berth in the postseason before the calendar hits Christmas. The Carolina Panthers are 16-1 since Newton’s accident, and 15 of those victories have come with the entire team perched on his (recently broken) back.

There is no question Newton is in the conversation for MVP this year and on most ballots he should be the front-runner, ahead of Tom Brady or Carson Palmer, to earn the award.

Newton has 25 touchdown passes, tied for sixth in the NFL, and despite a 93 passer rating that is near the middle of the pack for starting quarterbacks, Newton’s rating in the second half of games shoots to 104.7. His rating is 117.0 when the Panthers are trailing this year and 123.0 when that deficit is a touchdown or less. His passer rating in the fourth quarter is 115.0, but in fourth quarter situations within one score, he rates at a 130.6.

If clutch were a real stat, the acronym would be CAM.

Newton is also tied for fourth in the NFL in rushing touchdowns with seven, leading the Panthers’ potent ground attack. He leads all quarterbacks in rushing yards on the season—he has more rushing yards through 12 games, 476, than Russell Wilson (450) or Marshawn Lynch (417) this year—and despite a per-attempt average lower than Wilson or Aaron Rodgers, Newton is averaging 4.4 yards per carry as a power runner, calling his own number in the red zone for the tough inches more often than scampering for yards out in space or running free when a play breaks down.

Newton has amassed 32 touchdowns this season—that’s 32 different celebrations and 32 footballs given to adoring fans in the stands—accounting for 74 percent of the team’s trips to the end zone this year.

Hell, the guy even has two tackles. All the while, Newton has been smiling.*

(*Note: maybe not smiling on those tackles, as they surely came after a turnover, of which Newton has committed 12 this year, which isn’t great. Still, smiling a lot.)

It’s one year to the day after Newton’s accident that could have taken his life. Nobody should have walked away from that vehicle. And yet Newton did. Smiling.