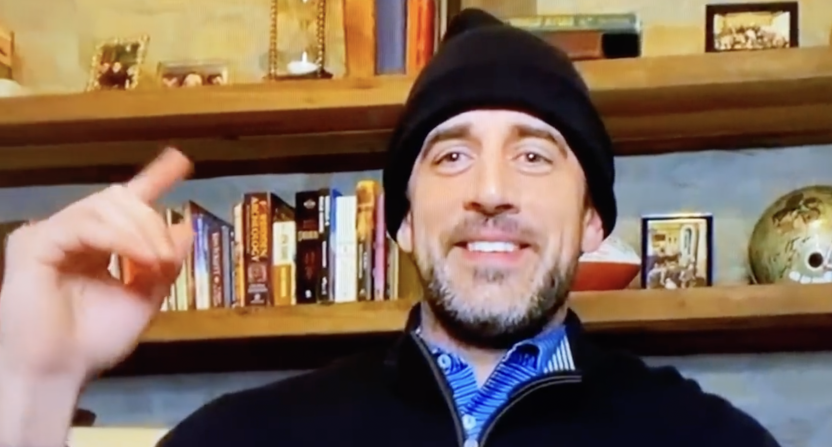 Aaron Rodgers is many different things.

On one hand, he’s the quarterback of the Green Bay Packers, who are considered a favorite to get the Super Bowl this season. Rodger, who was named the NFL MVP last season, is likely to be named so again this year.

On the other hand, Rodgers has revealed himself in recent weeks to be the poster child for the “Critical Thinker” set, and every week he seems to reveal another level to it.

Spouts anti-vax diatribes as if he’s the first person to think of them? Check.

Namecheck podcaster Joe Rogan as one of his medical experts? Check.

Sports a “cancel cancel culture” t-shirt while appearing on a podcast with worldwide reach? Check.

Shows support for The Rise of Skywalker, which even Mark Hamill thinks is douchy? Check.

Sees anyone disagreeing with him as some kind of violation of his First Amendment rights??? Check.

Rodgers added his latest generic attribute to the list of people who have said that they’ve “done their own research” on Monday night when, during an appearance on the ManningCast, he pointed out the copy of Atlas Shrugged on his bookshelf.

Aaron Rodgers, from a justified hater of awful Scott Walker to … having “Atlas, Shrugged” from nutty Ayn Rand.

The Ayn Rand novel is based around the philosophical notion of Objectivism, in which selfishness should be the guiding virtue for all mankind and that self-interest is what should motivate humanity’s pursuits, including economics and politics. The joke is often that the book appeals to very young men and college sophomores, not to mention a certain President of the United States, who lack the empathy and worldview that helps drive caring about the well-being of others.

It’s often cited as a “red flag” book by those in the dating world for what it says about someone who refers to it as their favorite.

Given everything else that’s come out about Rodgers in recent weeks, the reveal that he’s got a copy of Atlas Shrugged handy caught the attention of many on social media.

If Aaron Rodgers is reading Atlas Shrugged he really might play for another 15 years since he's apparently 19.

Aaron Rodgers brags he has Ayn Rand’s “Atlas Shrugged” on his bookshelf.

"Atlas Shrugged" has never been an inaccurate red flag.

it was the first book he named when asked

Aaron Rodgers having Atlas Shrugged on his shelf makes sense.

Will Rodgers mention the book during his usual Tuesday appearance on The Pat McAfee Show this week? We’re guessing it’ll come up and he’ll have lots of fun things to say about it.