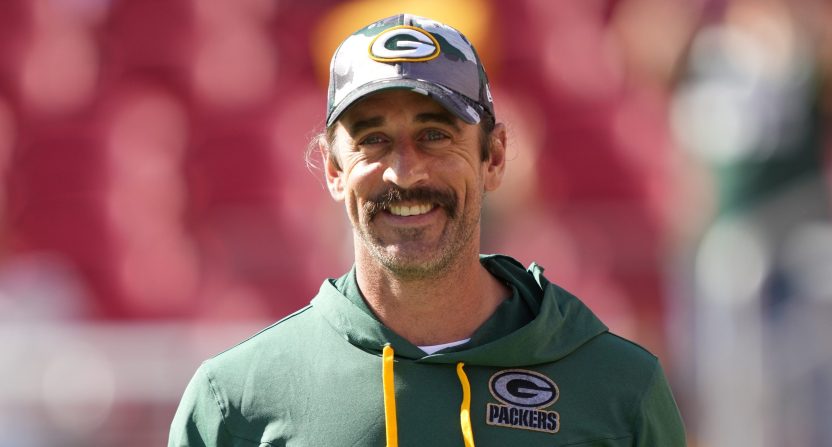 Green Bay Packers’ quarterback Aaron Rodgers certainly isn’t afraid to express his opinions. From his stances on COVID-19 vaccines and “immunization” to his criticisms of the media and their coverage of him to his discussion of ayahuasca use and more, Rodgers has recently been going on countless podcasts and saying what he thinks. And that extends to politics, where he recently offered some harsh criticisms of California and of Democratic governor Gavin Newsom.

Rodgers (seen above ahead of the Packers‘ Aug. 12 preseason game against the San Francisco 49ers in Santa Clara, California) has shown willingness to criticize both sides of the political aisle. Last month, he went on Joe Rogan‘s podcast and mocked current U.S. president Joe Biden, and he recently sparked discussion with a “Rodgers/Lazard ‘23 MAKE GREEN BAY GREAT AGAIN” shirt that parodied former U.S. president Donald Trump’s often-used slogan. But on an upcoming episode of Bill Maher‘s Club Random podcast, Rodgers seemed to agree with some of Maher’s criticisms of Trump, especially over his refusal to accept the results of the 2020 presidential election, and he wouldn’t commit to supporting anyone in particular in 2024.

And Rodgers also spoke out against Republican-backed government restrictions on abortion on this podcast. There, he said “I don’t believe the government should have any control over what we do with our bodies…As much as I might lean pro-life, I don’t want the government to tell me I can’t smoke a cigar, I can’t have a drink of alcohol, I can’t choose my own medical decisions. And if I’m a woman, don’t f**king tell me what do.”

Maybe the most notable things Rodgers said here were on California. There, he blamed COVID-19 restrictions for killing small businesses in his hometown of Chico, and criticized a proposed bill that would discipline physicians who spread COVID misinformation. The podcast doesn’t come out until Sunday, but Aaron Ting of SFGate got a preview, and relayed some notable quotes. Here are some of those on California:

Rodgers said of California generally, “State’s going to s— but I’m hanging on.” He went on to bash California localities over strict COVID-19 mitigation measures after doing so previously on Joe Rogan’s podcast.

After Maher argued that past mask mandates at his alma mater of Cornell were onerous, Rodgers chimed in, “They are masking at Berkeley, as well.” (Berkeley, Rodgers’ alma mater, is not currently enforcing a mask mandate for COVID-19, but it is requiring students who do not receive the influenza vaccine to wear masks indoors). Of stay-at-home orders that closed restaurants and other businesses, Rodgers said, “I grew up in a small town, very little cases up in Chico, California, but all the small businesses? F—ing gone.”

…Rodgers also expressed disapproval of AB 2098, a bill heading to Gov. Gavin Newsom’s desk that would discipline physicians for promoting COVID-19 misinformation. The bill is controversial because the definitions of “misinformation” and “disinformation” are broad. When Maher told Rodgers about the legislation, the quarterback asked, “based on whose standard of misinformation?”

A lot of that fits with what Rodgers has said before on how he doesn’t think many COVID restrictions are necessary, something he used to justify his decision to violate 2020 NFL protocols that mandated unvaccinated players to wear masks in team facilities and at press conferences (which eventually led to a fine for him). But it’s interesting to see him weigh in with particular comments on California (and Berkeley) government measures, and to do so in such strong terms.

Maher’s podcast with Rodgers will be available here Sunday.