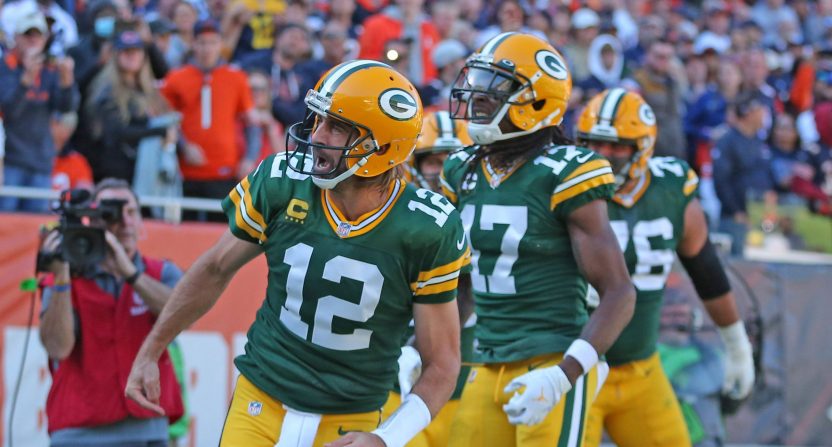 The problem with terms like “woke culture” and PC culture” and “cancel culture” is that none of the people those terms are supposed to describe actually use them or would think they aptly describe what they’re doing. They only come from people who don’t like receiving feedback and who want to blame others for the lack of universal love they’re receiving. And these terms have been thrown around so widely now that they’ve entered a phase where any form of perceived pushback is automatically considered “being canceled” despite the fact that cancel culture isn’t actually a real thing because the people who rail about being canceled are usually doing so while making TV appearances or writing about it in national newspapers.

All of which is to say that Aaron Rodgers blaming “woke culture” because a few people didn’t like his (objectively highly praised) taunt of the Chicago Bears this weekend is asinine and childish.

The whole thing was, again, widely appreciated on social media and elsewhere. About the only people who didn’t seem to like the move were Chicago Bears players and fans. Former Bears center Olin Kreutz said on The Score’s Mully and Haugh Show that he’d like to punch Rodgers in the face.

.@olin_kreutz didn’t like Aaron Rodgers' “I still own you” comment directed at the #Bears and their fans Sunday.

“I'd like to punch him in his face," Olin says.

A bit extreme, but, also, to be expected. The rivalry between the Bears and Packers is intense and the two football guys had now shared in a time-honored tradition of being tough guys in a tough sport going back and forth about that rivalry.

Again, other than that, the response to Rodgers’ taunt has been overwhelmingly positive and enjoyed. But because of one negative reaction from a person who took it personally, Rodgers apparently sees this as “woke culture” run amok.

"Are we getting that soft as a society where we can't have a back & forth now.. somebody can pay for a ticket & say whatever the hell they want which they should be able to but the ONE time I say something back I've disrespected an entire city & organization" ~@AaronRodgers12 pic.twitter.com/6BNYBnPI4G

“Are we getting that soft as a society that we can’t have a back and forth now?” Rodgers said on The PatMcAfee Show after saying he has respect for Kreutz. “Somebody can pay for a ticket and say whatever the hell they want, which I think they should be able to, that’s fine, but the one time you say something back to them, that gets caught on hot mic… now it’s that I’ve disrespected an entire city and organization and my own organization.”

“There’s a PC woke culture that exists,” Rodgers continued. “And there’s a cancel culture at the same time and it’s based on people’s own feelings of maybe personal miserability or distaste for their own situations or life or just the enjoyment of holding other people down underneath their thumb.”

Rodgers certainly received a lot of unfair criticism this offseason and early season over his situation with the Packers but, what in the heck is he talking about here? Olin Kreutz is an old-school football guy. He’s about as far from “woke culture,” whatever that is, as you can get. And, again, he is literally one dude against a sea of people who praised the incident for what it was.

Rodgers clearly has some bones to pick and decided to apply them to this situation, but it just doesn’t fit. And in a way, it’s a perfect encapsulation of the whole “woke culture” and “cancel culture” argument. A little bit of disagreement equals being told that you’re wrong and bad and should be punished, according to those who spout these phrases.