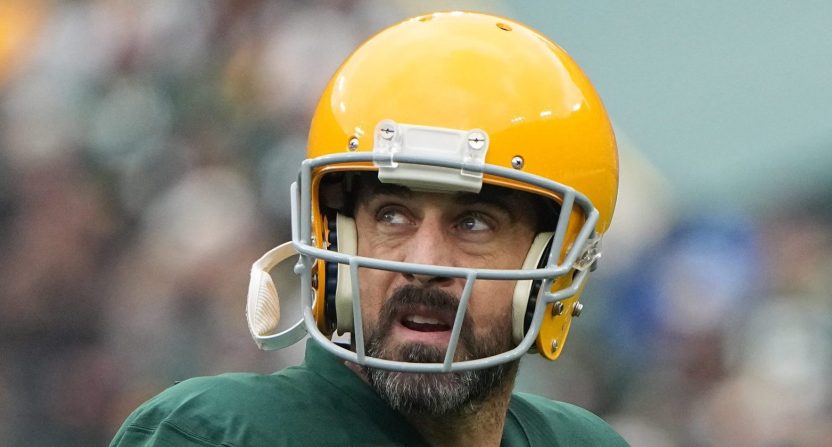 Aaron Rodgers finds himself at a crossroads for the rest of the 2022 NFL season. It also sounds like the Green Bay Packers star might have started thinking about the crossroads ahead of him in 2023.

We know that Rodgers has been playing with a broken thumb and has seemed off for most of the year, but after he left Sunday’s game against the Philadelphia Eagles early with a rib injury, it put Rodgers’ status for this weekend’s game against the Chicago Bears in question. However, all signs have pointed to him playing despite the fact that the playoffs are highly unlikely for the Packers this season.

Meanwhile, Jordan Love played well in relief of Rodgers last Sunday and there could be an opportunity to give him more reps in the coming weeks, especially if the playoffs are out of the picture. Rodgers praised Love during the week, but when asked about making space for his backup to play more, Rodgers doesn’t seem quite ready to hand over the reins, even temporarily.

According to USA Today Packers beat writer Ryan Wood, Rodgers says he hopes to finish the season out as the quarterback but would approach letting Love play instead with an “open mind” if the team is eliminated from the playoffs.

Asked Aaron Rodgers how he’d feel if #Packers wanted to give Jordan Love a couple starts to finish the season. Rodgers says he hopes to finish season out, but would approach it with an “open mind” if team doesn’t win final 5 games.

Woods then followed up that question by asking Rodgers if it makes sense for him to play less and rest given his injuries.

“That’s an assumption that this place won’t look any different next year,” Rodgers said. “So I think that’s part of the conversation.”

As for what that means, exactly, the NFL world is still trying to figure that out.

This could mean a dozen different things, but my guess?

If Rodgers is considering retirement, then there’s no point in saving his body for next season. https://t.co/PZ6peaPg5d

I honestly do not know what this means https://t.co/VEU5LlZMyw

Me trying to figure out this word salad https://t.co/0M0lC58tuX pic.twitter.com/v9Gum5EGbb

Is Rodgers saying that it wouldn’t make sense to rest for next season because he might not be in Green Bay next season? Is he trying to say that there could be huge franchise changes? It’s hard to think of another explanation for it, but then again, Rodgers is very prone to cryptic, confusing, and conspiratorial messages all the time. So who knows…