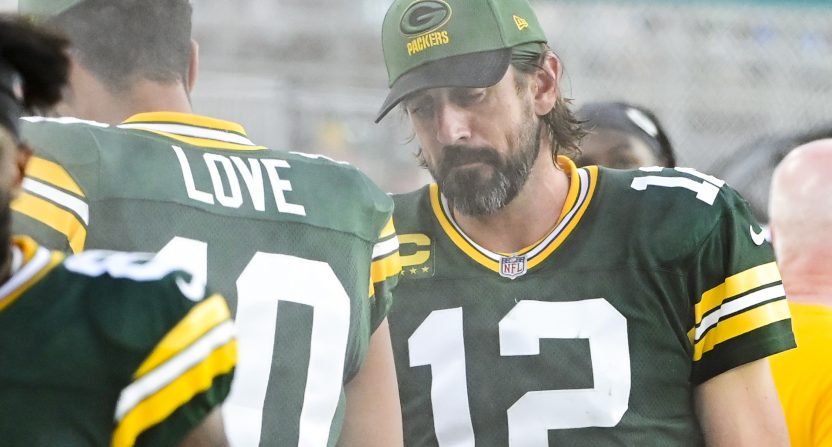 The NFL world was shaken up on Wednesday when it was revealed that not only did Green Bay Packers quarterback Aaron Rodgers test positive for Covid-19 but he had never actually been vaccinated, to begin with. The news meant that Rodgers would miss this Sunday’s showdown against the Kansas City Chiefs and was in danger of missing next weekend’s game as well, to say nothing of the way it has impacted his reputation and opened him up to league discipline.

A lot of people had strong opinions on Rodgers’ actions but we have yet to hear from him directly. We did hear from a source on Thursday, according to Mike Florio at Pro Football Talk, who says that the quarterback is “furious” over the leak that he is not actually vaccinated.

“Per a league source (the same one who tried to tell me on October 5 that Rodgers wasn’t vaccinated), Rodgers is “furious” over the fact that his true status was leaked,” said Florio. “Given his propensity to complain about the manner in which he’s treated by the media, it’s safe to wonder whether he’ll complain about the fact that NFL Media reported his status, despite his clear desire to hide it — and his ability to do it for weeks.”

The strange part of that news is that the truth was going to come out as soon as Rodgers tested positive because the protocols are different for vaccinated and unvaccinated players. Since Rodgers is going to miss the game, that would make it clear that he wasn’t vaccinated as he would have been able to return by then if he was.

If Rodgers is hoping to gain any sympathy from people around the NFL world, that is extremely unlikely, especially when you see the reactions that came in via social media on Thursday.

Aaron Rodgers is “furious” about leak of his unvaccinated status. To be safe, trade him to the Lions…. Those guys can’t catch anything.

what did aaron think was gonna happen when the game started and he was nowhere to be found https://t.co/VktqiVu9g6

We don’t know when we’ll hear directly from Rodgers but it’s certainly going to be a big deal when we finally do. We’ll see if he’s able to make his case or if everyone is tired of listening.