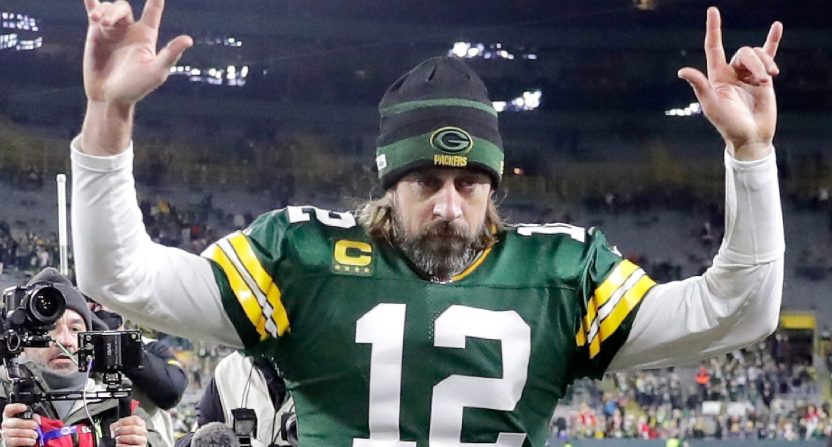 There has been a lot of speculation in recent years over how much longer Green Bay Packers star quarterback Aaron Rodgers will play in the NFL.

Last offseason, when Rodgers and the Packers were in the midst of a very public rift, there were even strong odds that he might hang up the cleats for good. That didn’t happen and it ended up being a wild year for Rodgers, on and off the field. And though he has signed a lucrative extension that runs through 2024, in theory, there will continue to be rampant speculation that he might decide to be done with the game sooner than later.

In an interview before The Match that he and Tom Brady won on Wednesday, the self-described “free thinker” admitted that he still thinks about retirement all the time.

.@AaronRodgers12 on retirement last night on The Match.

“I think about it (retirement) all the time,” pic.twitter.com/Hj4w6o6UwF

“I think about it all the time,” Rodgers said. “When you commit, you’re 100 percent. But the older you get, the interests change, and the grind, I think, wears on you a little more… The football part is the easy part. That’s the joy. It’s the other stuff that wears on you and makes you think about life after football. Tommy [Brady] obviously set the bar so high with playing so many years, but I can definitely see the end coming.”

Considering that he reportedly thought about retiring after the 2020 season as well as the 2021 season, we can assume this will continue to be an annual tradition in spite of the fact that Rodgers remains on the top of his game on the field.