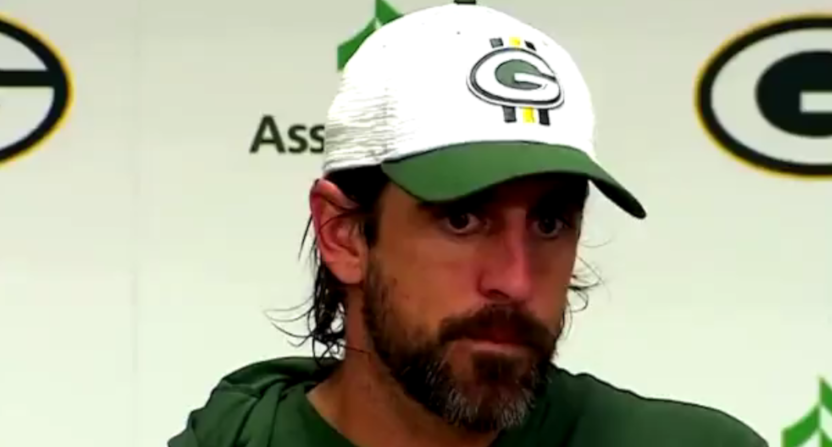 On Friday, as soon as Aaron Rodgers started saying all kinds of scientifically inaccurate things about vaccines and how he was trusting medical advice from podcaster Joe Rogan over scientists, you knew it was only a matter of time before some of his sponsorship deals started drying up.

The big one, State Farm, doesn’t seem to be in trouble just yet. They told Ad Age that they’re going to stay mum on Rodgers for the time being and shift their focus to a different ad campaign. Though, people were still seeing State Farm ads featuring Rodgers this weekend. It was also noted that Rodgers’ decision doesn’t violate any current State Farm policies or requirements.

However, a different organization that Rodgers has been associated with for a long time, Prevea Health, has a vested interest in scientifically sound healthcare. Likely with that in mind, they announced on Friday that they would be ending their partnership with Rodgers.

An announcement from Prevea Health and Aaron Rodgers regarding their partnership. pic.twitter.com/TEesvDBl3T

“Prevea Health and Aaron Rodgers have made the decision to end their partnership effective Nov. 6, 2021,” the organization said via a statement. “Aaron has been a partner of Prevea Health, serving as a spokesperson and supporting the health care organization’s health and wellness initiatives throughout Wisconsin, since 2012.”

Rodgers said in his interview on Friday with The PatMcAfee Show that he was not anti-vax but, according to NBC News senior reporter Ben Collins, who covers vaccine news closely, “it would be impossible to draw up a more stereotypical anti-vaxxer argument than the one being outlined by Aaron Rodgers today.” So it makes a lot of sense why a medical organization would not want to continue to be associated with the Green Bay quarterback.

Rodgers is expected to be back in a Packers uniform next weekend once he’s out of Covid-19 protocols for unvaccinated players. It’s unlikely that he’s going to face any kind of punishment from the franchise for the NFL, but his reputation and ability to attract big-name sponsors definitely appear to be taking hits.