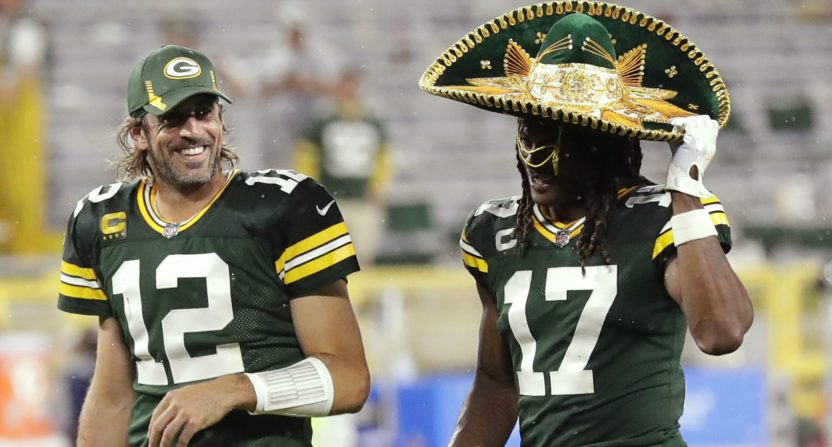 All week long, Aaron Rodgers had to hear a lot of people in the media talk about what’s wrong with him. A former teammate accused him of having a bad work ethic. One NFL executive said his off-season activities, including hosting Jeopardy! and attending the Kentucky Derby, show how disinterested he is. On the CBS pregame show, he was called everything from “bored” to “selfish” to “uninterested” to a “distraction.” They even saw his call not to panic as a sign of weakness.

All Rodgers did in response was throw for four touchdowns and lead the Packers to an easy 35-17 victory over the Detroit Lions on Monday Night. And afterward, Rodgers had some feedback for his critics as well.

“We tried to show that we cared a little bit more tonight,” said Rodgers at the post-game presser. “I just think people like to say a lot of bull****, and it’s nice to come back in here after a game like that.”

“I think there’s even more now than when I first started playing, so many overreactions that happen on a week-to-week basis. So, it’s nice to come out and have a good performance and get the trolls off our back for at least a week.”

He’s got a point. Sure the Packers looked horrendous in the first week of the season and, coupled with all of the off-season drama between Rodgers and Green Bay, it was easy to connect the dots. But it was literally one game, the first one of the season, in fact. That so many people in the NFL media seemed so eager to pile on Rodgers after one game certainly said more about them than it says about him.

Complaints about Rodgers’ hairstyle and suggestions about finding inner peace became punchlines very quickly in “Football Guy” circles this week. If all of those things were to blame for the loss last week, we suppose they get credit for the win this week. We’ll see how next week goes for Rodgers when the Packers travel to San Francisco to play the 49ers on Sunday.