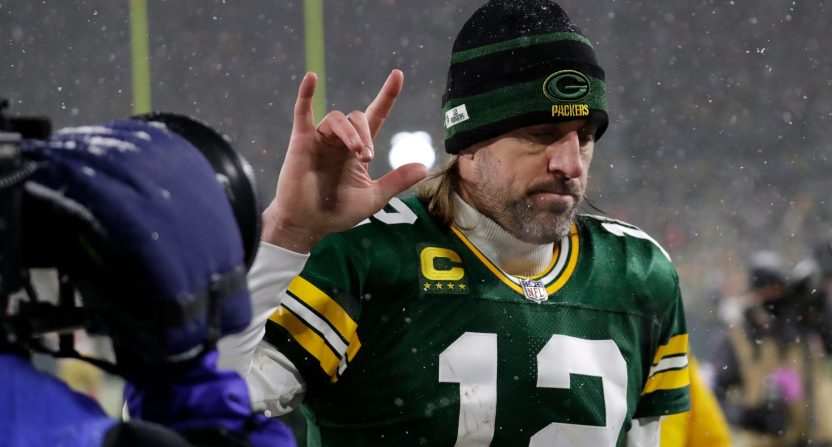 A week after announcing that he was staying with the Green Bay Packers, Aaron Rodgers has signed a four-year contract to make things official.

Rodgers’ contract terms are a bit complicated but in total, this contract encompasses the last year of his current deal (2022) plus four more years where the final two years are essentially dummy years in order to spread out Rodgers’ cap number. As explained by NFL Network’s Ian Rapoport, those dummy years would be redone if Rodgers decides to keep playing beyond 2024. By doing that, Rodgers’ cap number drops from a reported $46.66 million to $28.53 million for the Packers in 2022, which will buy the team more time and flexibility to go for a title.

The contract is a 4-year extension, a complicated one, with two dummy years — placeholders — on the back end. It lowers his cap number and gives GB plenty of room to work. https://t.co/VlnbubjPnw

More details:
Essentially, Aaron Rodgers gets $50M per year over 3 years, then likely retires. If he keeps playing, those final two years (on a 4-year extension, 5 years total) will be redone. https://t.co/CVTXfrKSUE

It’s easy to speculate that Rodgers’ new contract helps make it easier for the Packers to re-sign Davante Adams to a long-term deal. That remains to be seen as the two sides are reportedly “far apart,” but there’s definitely more room to play with before the Packers are on the hook for a $20.5 million cap hit on the final year of Adams’ current contract.