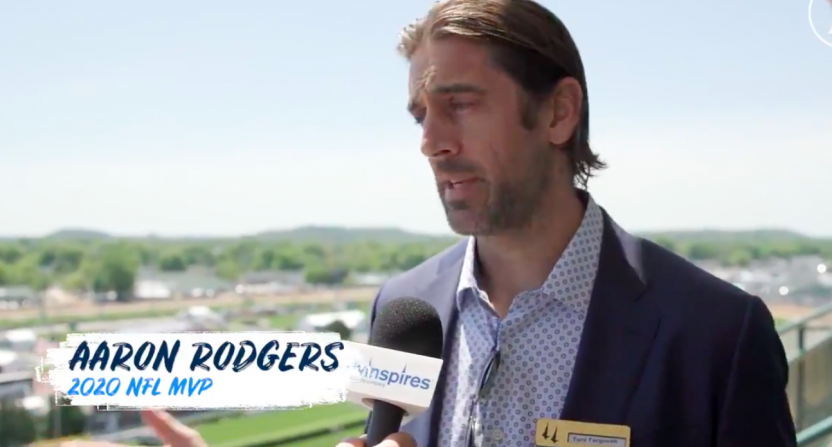 Ever since the Green Bay Packers’ NFC Championship Game loss to the eventual Super Bowl champion Tampa Bay Buccaneers in January, there’s been a lot of discussion about if quarterback Aaron Rodgers would return to the team. Yes, Rodgers was under contract through the 2021-22 and 2022-23 seasons, but he’d expressed a lot of issues with the team (especially about their drafting of quarterback Jordan Love in the first round in 2020).

That led to pieces on Rodgers sounding “like a guy saying goodbye,” pieces on teams trying to acquire him, pieces on him reportedly saying he wouldn’t return to Green Bay and asking for a trade, pieces on him showing up at sporting events and not discussing this, pieces on the bizarre suggestion that he might retire to host Jeopardy! (he was a popular guest host there, but there’s been very little to suggest he’d actually be offered the job full-time), and pieces on sportsbooks anticipating he’d retire before the Packers’ first practice. And now, much of that seems irrelevant. ESPN’s Adam Schefter and NFL Network’s Ian Rapoport both reported Monday that Rodgers now looks likely to return to Green Bay for this year, but under a deal that sees him receiving more freedom for 2023 (in particular) and 2022:

The reworked deal for Aaron Rodgers includes him having a say in his future in 2022 and 2023. https://t.co/EkQi7dZTXE

More about the Packers’ concessions to Aaron Rodgers that set up one more season in Green Bay based on an accumulation of information:https://t.co/KbnfaBv4q9

If Packers’ officials sign off on their willingness to trade Aaron Rodgers, and the agreement is finalized soon, here’s the biggest concession the reigning MVP will receive: the freedom to decide where he wants to play in 2022.

Schefter noted too that this might also lead to receiver Davante Adams coming back to Green Bay:

With Aaron Rodgers expected to return to Green Bay while giving the Packers more cap room, the team now can make another run at trying to sign WR Davante Adams to an extension, per sources.

And, as per Schefter’s ESPN.com piece on this, it sounds like the Packers are set to give Rodgers a fair bit of what he wanted:

The agreement in principle would include an approximation of the following conditions that the two sides now are finalizing to alleviate and address some of Rodgers’ issues before the opening of Tuesday’s training camp:

* The 2023 year in Rodgers’ contract — the last one in his current deal — would be voided, with no tags allowed in the future.

* The Packers would agree to review Rodgers’ situation at the end of this season.

* Rodgers’ contract would be adjusted with no loss of income to give the Packers more cap room now.

* Mechanisms will be put in place to address Rodgers’ issues with the team.

We’ll see where this goes from here, but for the moment, the balance of probabilities looks to be in favor of Rodgers playing at least one more season in Green Bay. Apologies to those who thought he’d really leave the NFL for a Jeopardy! hosting gig he was never actually offered.