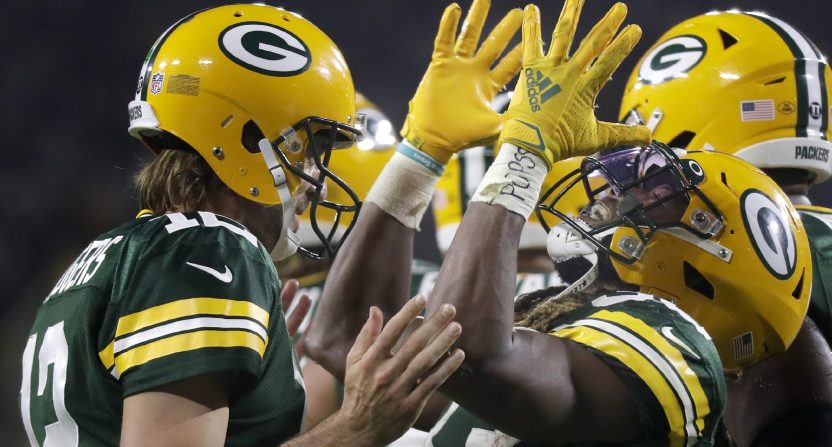 There’s been a lot of strong chatter all week long about how Green Bay Packers quarterback Aaron Rodgers doesn’t have a strong work ethic, doesn’t seem to care anymore, and seems fairly unmotivated in general. Whether he was listening to that chatter or not, Rodgers made it pretty clear in his four-touchdown performance on Monday Night Football against the Detroit Lions that whatever problems the Packers might have, he’s not really one of them.

After Week 1’s embarrassing loss to the New Orleans Saints, Rodgers said that it was way too early for anyone to panic. And while many in the media around him did just that, he came out on Monday and took care of business.

The game was a real back-and-forth affair at the start with the Lions and Packers trading touchdowns. The Packers got on the board with their first score of the night with this Rodgers shovel pass to a crossing Aaron Jones. Perhaps not the most impressive pass he’s ever thrown but the guy was just getting started.

Rodgers would get his second score of the evening in the second quarter on a one-yard touchdown pass to Jones. This wouldn’t be the last time this duo got together for a scoring play.

Not content to just throw touchdowns, Rodgers also looked like his quintessential old self on this 50-yard bomb to Davante Adams that ignited the crowd.

If people were waiting to see the Rodgers of old, they certainly got it on his third touchdown pass of the night. This one was an absolute dime to Robert Tonyan for the go-ahead score. Talk about threading a needle.

Along the way, Rodgers added another accolade to his Hall-of-Fame resume, becoming 10th all-time in NFL passing yards overall.

With time running out in the third quarter, Rodgers connected once more with Jones for an 11-yard touchdown pass to go up by 11. That made it four touchdown passes on the evening for a very “unmotivated” quarterback.

That's the hat trick for @Showtyme_33!

Jones would pick up yet another touchdown on a one-yard run to put the Packers up 35-17 and they never looked back. Rodgers finished 22 of 27 with 255 passing yards, four touchdowns, and no interceptions.

Just like their Week 1 performance was just one game, the Packers’ great effort in Week 2 is also just one game. But considering how many media members decided to go all-in on Aaron Rodgers following that first one, we’d love to see how many of them call themselves out and come clean about the hot takes after this performance. We’re guessing not many of them will, but, to paraphrase Aaron Rodgers, maybe this is a good reminder to R-E-L-A-X and let the season play out.