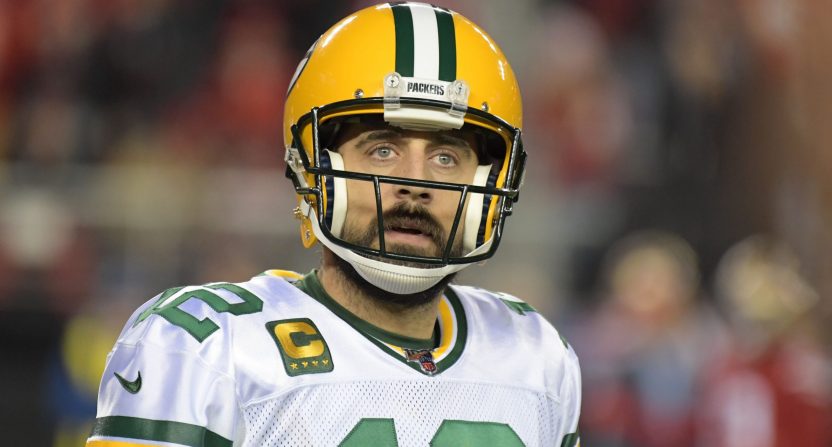 One of the stranger news days in a while came on Thursday afternoon ahead of the 2021 NFL draft, with ESPN’s Adam Schefter reporting that Green Bay Packers’ quarterback Aaron Rodgers has told some in the organization he doesn’t want to return. That opened some floodgates, with everyone from Schefter to Fox’s Jay Glazer to NFL Network’s Ian Rapoport to NBC’s Mike Florio to Pro Football Network’s Trey Wingo quickly weighing in with specific reports on the Rodgers situation. Here’s Schefter’s first tweet on this:

Reigning MVP Aaron Rodgers is so disgruntled with the Green Bay Packers that he has told some within the organization that he does not want to return to the team, league and team sources told ESPN on Thursday.

And here’s his on-air report:

Here are some of the other tweets on this:

This, as @JayGlazer knows, is about way more than a new contract. https://t.co/Zz6hAlQnk1

The #Packers remain committed to Aaron Rodgers. @TomPelissero said there is “zero” chance of trading him. It’s all about getting an extension done… and if that happens, this should take care of the matter (until next time). https://t.co/Lv56tHCC6M

Source with knowledge of dynamics says Aaron Rodgers could indeed be traded this weekend. The question is where?

As @JayGlazer said, the contract is part of the reason for Rodgers’ discontent. I’m told he “doesn’t like anyone in the front office for a variety of reasons.”

One more note on #Packers QB Aaron Rodgers: He really impressed the brass during his stint on Jeopardy. The belief is, when they finish auditions, he’ll be among those with a chance to do the job full-time. If this isn’t sorted out, a job hosting is also a possibility.

Sources: The Packers reportedly told Aaron Rodgers they were going to trade him in the off season, then backed off. It’s been a bleep show between them ever since. And within the last week Rodgers told the team.. trade or no trade I’m not coming back. Buckle up folks

From unimpeachable source: As of last night, Aaron Rodgers’ wish list was 49ers, Broncos, Raiders (not necessarily in that order). He wanted Packers to take the 49ers’ offer. Next move by Rodgers is TBD.

This is not the first time there have been tensions between Rodgers and the Packers. Rodgers reportedly had plenty of issues with former Green Bay head coach Mike McCarthy, as discussed in an April 2019 Bleacher Report piece from Tyler Dunne. And that piece describes divides not just between Rodgers and McCarthy (who was fired in December 2018 after a 4-7-1 start to the season), but also between both of them and general manager Ted Thompson (the Packers’ GM from 2005-17) and other members of the front office.

While Thompson isn’t in charge in Green Bay any more, that hasn’t solved the problems. Current Packers’ GM Brian Gutekunst took over in 2018, but he was previously a scout, director of college scouting, and director of player personnel in the team’s front office (from 1998-2017), so he wasn’t a new face. And he made his own move to specifically alienate Rodgers last spring, trading up to draft Utah State quarterback Jordan Love 26th overall despite the Packers’ dire needs at other positions. And Rodgers said after that he wasn’t thrilled with the pick, and that it might mean he wouldn’t finish his career in Green Bay as he’d hoped given his desire to play into his 40s:

Aaron Rodgers on the Packers' taking Jordan Love: "The general reaction at first was surprise, like many people. Not going to say I was thrilled by the pick, necessarily. But I understand the organization is not thinking just about the present, but the future and I respect that."

Most honest Aaron Rodgers answer just now, in response to being asked why he wasn't thrilled with the Love pick.

"My sincere desire to start and finish with the same organization, just as it has with many other players over the years, may not be a reality at this point."

So the path to this has been coming for some time. But it’s still somewhat remarkable to see how much this has apparently escalated, especially with Rodgers throwing for 4,299 yards and a career-high 48 touchdowns last season (with just five interceptions and a 70.7 percent completion rate)  and winning his third MVP award. That feels like a guy most teams would try to move everything to keep, even if he’s 37. (And both Drew Brees and Tom Brady have recently found a lot of success playing into their 40s, so that dream of Rodgers’ isn’t inconceivable either.)

It’s also not like this is a case of Green Bay needing to rebuild, or Rodgers looking to join a more immediate contender. The Packers went 13-3 last season and made it to the NFC championship game, where they lost 31-26 to the  eventual Super Bowl champion Tampa Bay Buccaneers. That marked their second straight season of losing in the NFC championship game; the previous one, a 2020 loss to the San Francisco 49ers, is seen at top. This team wasn’t far away from a title at all, and now that might all blow up.

However, if the bad feeling between the sides is significant enough that this relationship can’t be salvaged, there may be some logic to moving on now. First off, Rodgers’ stock is particularly high coming off that stellar season and third MVP award. Second, having this come out on draft day means that many other teams haven’t firmly set their quarterback plans yet; that could lead to a lot more suitors if teams in win-now mode decide to go after a proven vet like Rodgers rather than a young player. (This is a problem for the Packers’ 2021 cap situation versus trading him after July 1, but they’re in cap trouble regardless of when they trade him, and there may be some benefits to getting that cap hit out of the way in one year versus spreading it over two seasons.) But we’ll see if this does actually wind up leading to a trade or not. At any rate, it’s certainly added another storyline to draft day.