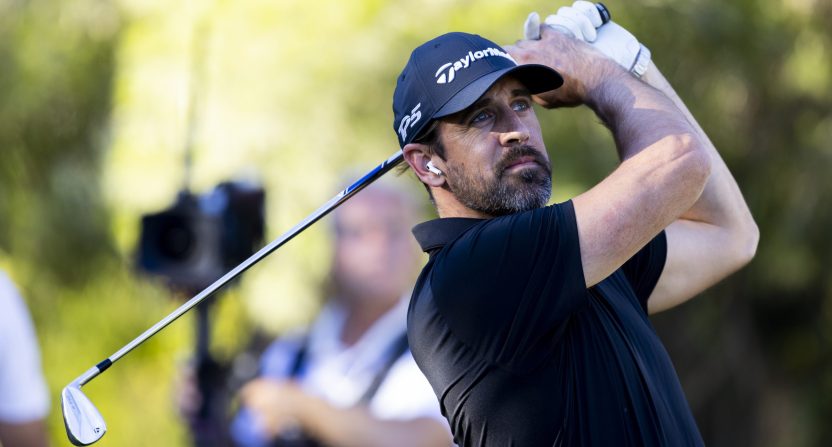 Aaron Rodgers made some new comments on his immediate future during his weekly appearance on The Pat McAfee Show on Tuesday.

Unfortunately for Green Bay Packers fans, it doesn’t have much, if anything, to do with his future under center.

“I’m gonna play in the Pebble Beach Pro-Am next week,” Rodgers said via The Pat McAfee Show on Twitter. “I need a little competition in my life. I’m excited about that.”

"I'm gonna play in the Pebble Beach Pro-Am.. I love playing golf and I'm excited to get back out there" ~ @AaronRodgers12#PMSLive pic.twitter.com/wgju0YzcOt

Rodgers acknowledged that besides the Philadelphia Eagles, San Francisco 49ers, Cincinnati Bengals and Kansas City Chiefs, the other 28 NFL teams are out “whale watching.”

“There’s only four teams still playing,” Rodgers later added. ” You’re still playing and still excited about what’s in front of you. When you’re on the other side of that and you’re not doing that, I think you miss that competition.”

Rodgers said that the Pebble Beach Pro-Am used to take place the week after the Super Bowl, so it was easier for players like him to participate. Unfortunately, they’ve had to move the event up due to scheduling and with Rodgers missing a few years, he said he’s excited to get back out there.

For now, Rodgers is mum about what he plans on doing in 2023, besides playing in a golf tournament.

Last week, Rodgers seemed uncertain about what lies ahead but admitted that he’s not “mentally or physically” ready to make any rash decisions on his future.

“When you have played for so long, it is never about jumping right into the next season,” said Rodgers via The Pat McAfee Show on Twitter. “We had all the conversations that we wanted to have about football for now. They weren’t pressing for a specific answer, and I’m not mentally or emotionally at the point to give an answer.”