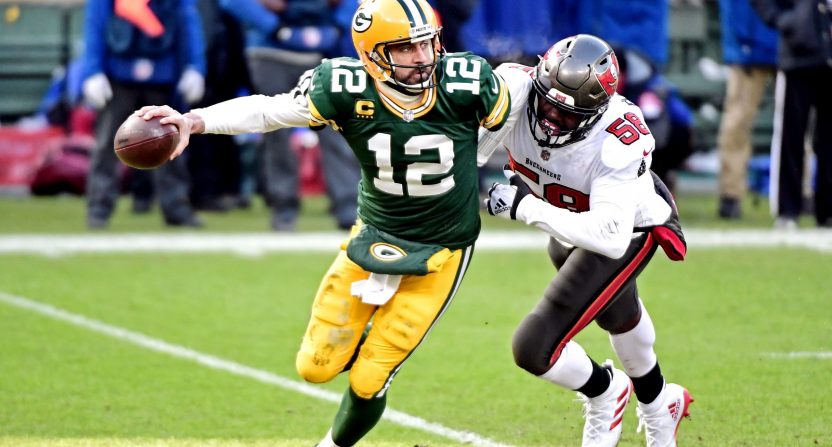 The Green Bay Packers lost the NFC Championship Game 31-26 to the Tampa Bay Buccaneers on Sunday (thanks in part to a coaching decision that made very little sense). It’s a very disappointing way to end what has been a ridiculous season from Aaron Rodgers that will surely result in his third NFL MVP award.

And while Rodgers is still playing football at an unbelievable level, the Green Bay quarterback said in his postgame press conference that he’s “uncertain” about his future.

Aaron Rodgers after the game: “A lot of guys futures, they’re uncertain, myself included. … Just gonna have to take some time away and clear my head and kind of see what's going on with everything." pic.twitter.com/3GlzPU9EsZ

“A lot of guys’ futures that are uncertain, myself included. That’s what’s sad about it most. Getting this far. Obviously there’s going to be an end to it at some point whether we make it past this one or not. Just the uncertainties is tough and the finality of it.”

Rodgers was also asked “How do you go on from here… how do you take the next step?”

Here was his response:

“That’s a good question. I don’t know. I really don’t. There’s a lot of unknowns going into this offseason now. I’m going to have to take some time away for sure, and clear my head, and kind of see what’s going on with everything. But it’s pretty tough right now, especially thinking about the guys that may or may not be here next year. There’s always change. That’s the only constant in this business. It’s really tough to get to this point. Really, really tough, especially with there only being one bye week, playoffs, it’s a grind to get to this point. And that makes the finality of it all kind of hit you like a ton of bricks. That’s why it’s a gutting feeling in your stomach.”

Aaron Rodgers sure sounded like a guy saying goodbye.

And Packers beat writer Matt Schneidman of The Athletic had a similar reaction, tweeting that Rodgers “fully sounded like someone who doesn’t know if he’ll be the QB here next season, ” and that Rodgers “more than any athlete on planet Earth, knows exactly what he’s saying with every word.”

Aaron Rodgers fully sounded like someone who doesn't know if he'll be the QB here next season.

After last season's NFC title game loss, Aaron Rodgers spoke much more optimistically about his future with the Packers.

Listening to him just now was the opposite. So much more uncertainty in his voice and his words. It's not hard to read between the lines on this one. https://t.co/iGr7mRlLM3

Aaron Rodgers, more than any athlete on planet Earth, knows exactly what he's saying with every word. He has a purpose with every syllable he says.

He said he's uncertain about his future.

He wouldn't say that if he fully felt he'd be the QB here next season. End of story.

Rodgers turned 37 in December, but again- he’s playing football at an *elite* level. And Tom Brady, Drew Brees, and company have shown the quality quarterback play can continue into the 40s. There’s no reason to believe that Rodgers won’t still be one of the best for a few more years- if he wants to keep playing, of course.

Packers head coach Matt LaFleur said that he “sure as hell hopes” Rodgers returns to the Packers. “He’s the MVP of this league. He’s the heart and soul of this football team. He better be back here. He’s our leader.”

LaFleur asked about another shot to coach Rodgers: "I sure as hell hope so. He's the MVP of this league. He's the heart and soul of this football team. He better be back here. He's our leader."

Ultimately, this is all about what *Rodgers* wants, and perhaps it’s not a future in Green Bay. After all, he made it clear that he wasn’t “thrilled” with the Packers’ decision to draft quarterback Jordan Love in the first round last May. And the organization did that while doing very little to add talent around Rodgers in the Green Bay offense.

It’s also possible that Rodgers is just speaking in frustration after a really tough loss, and maybe he’ll sound more optimistic about his Packers future in the coming weeks. But if he’s really considering moving on from Green Bay, that would have massive, massive ramifications for the Packers and the entire NFL. That’s while quarterbacks such as Deshaun Watson and Matthew Stafford are already expected to be on the move as part of what is sure to be a wild quarterback carousel this offseason.