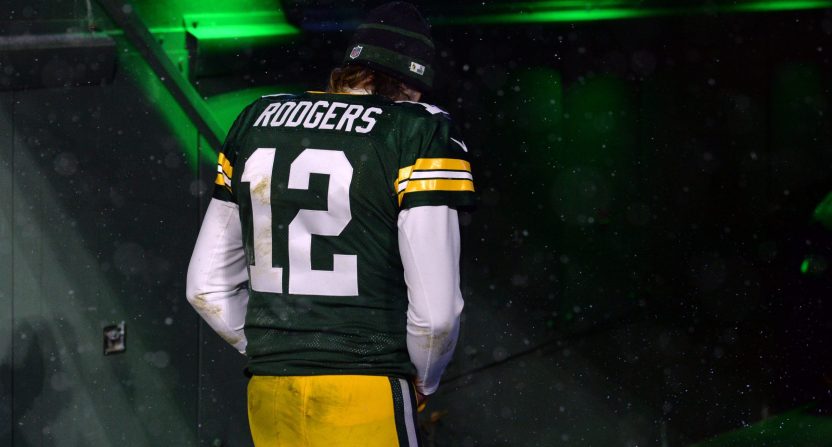 Following the Green Bay Packers’ epic playoff loss to the San Francisco 49ers at home over the weekend, quarterback Aaron Rodgers certainly opened the door again for the possibility that his time in Wisconsin is over.

“I didn’t think we’d be talking about this after this game,” Rodgers said. “I’m going to take some time and have conversations with folks around here, and then take some time away and make a decision — obviously before free agency or anything gets going on that front. It’s fresh right now. A little shocking for sure. I was hoping to have a nice weekend for the NFC Championship, to enjoy the lead-up and then start contemplating some things, so I haven’t even let the moment really sink in yet.”

Rodgers came into the season with tons of speculation about his future given the rocky relationship between him and the franchise. While the team came together on the field, Rodgers’ roller-coaster season off-the-field has kept him in the news cycle almost endlessly (which is impressive considering he thinks he’s been “canceled.”).

Questions about his personal beliefs aside, the speculation about where one of the best regular-season quarterbacks of the last two decades might want to play next season is in full force.

Vegas certainly seems to think Rodgers’ future is with the Denver Broncos. The team that expressed a lot of interest in trading for him before the season would clearly still be very interested.

Where will Aaron Rodgers play next season if he leaves the Packers (via @betonline_ag)?:

Further driving the Denver speculation is the fact that the Broncos appear to be zeroing in on hiring Packers offensive coordinator Nathanial Hackett as potentially their next head coach. While it’s no guarantee, there might be an assumption that Rodgers may want to follow his OC there for familiarity.

The Pittsburgh Steelers are also a trendy pick as they need a quarterback to replace Ben Roethlisberger and Rodgers and Steelers coach Mike Tomlin have expressed strong admiration for one another.

Cleveland, New England, and Philadelphia have all also been thrown out there as potential destinations for the NFL MVP.

It’s also worth noting that the possibility exists that Rodgers could simply decide to retire so that he can make time to finally read “Atlas Shrugged” or something.