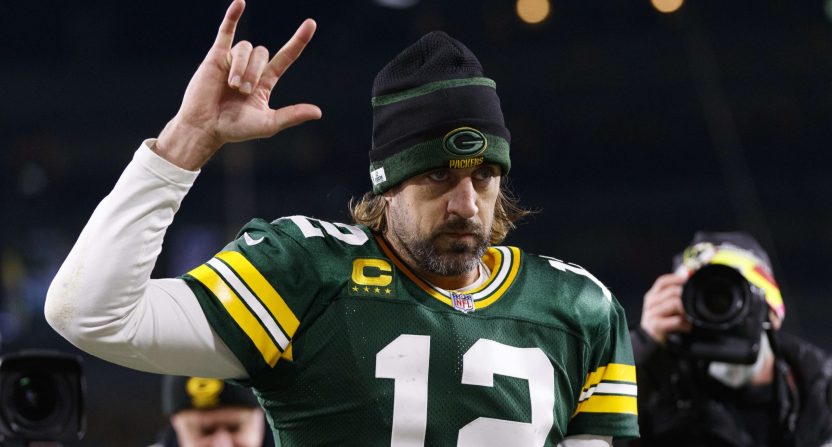 Aaron Rodgers played a heck of a game on Sunday night, going 29 of 37 for 341 yards, four touchdowns, and zero interceptions in a 45-20 Green Bay win over the Chicago Bears.

That’s a 141.1 passer rating, pretty impressive by any standard, let alone a guy who is dealing with a toe injury so bad that he’s gone back and forth about whether or not to get surgery on it for the past few weeks. Rodgers also hasn’t practiced much in recent weeks, making his in-game efforts all the more amazing while also calling into question just how long he can keep this up.

After the game, Rodgers was honest about how much the toe is bothering him and that the situation may be getting worse.

During his post-game peas conference, Aaron Rodgers said he suffered a setback Sunday night to his fractured toe and it “feels worse”. Surgery is, in his words, “a last resort, for sure.” But the toe is expected to be re-examined.

“It feels worse,” Rodgers said after the game. “I don’t know what kind of setback that I had tonight, but we will look at it tomorrow, but I definitely took a step back tonight.

“I can’t make that call right now. We’ll look at it tomorrow and do a film. That would be last resort for sure, but I’ll have to see what kind of setback it was tonight.”

Rodgers hasn’t been any about saying surgery is an option, but as the season rolls on and the Packers get closer to the playoffs, the less likely it becomes that he’ll want to risk missing any games due to it. Rodgers said previously that he thinks he could get surgery and not miss any games.

In the meantime, Rodgers is enjoying the way the season has played out (on the field, at least).

“It feels great (winning a primetime game),” said Rodgers. “It was fun to walk off a winner again at Lambeau, we’ve obviously had a lot of success the last 10 or 11 at home we’ve won, so it’s fun playing here and playing in this rivalry. The fans have been really good and just reciprocating the love right back to them.”