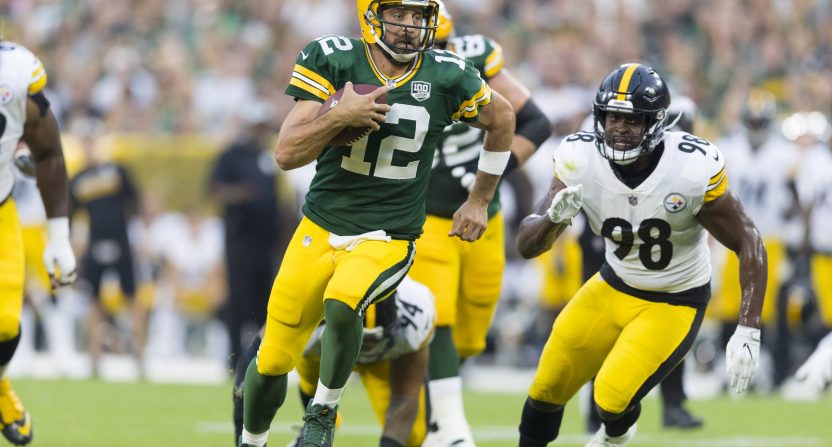 Aaron Rodgers’ infamous toe is back in the news this week. The fractured toe that set off a chain reaction of reports, responses, and rumors last week didn’t seem to hamper the Green Bay Packers quarterback in Sunday’s win over the Los Angeles Rams (though that didn’t stop announcer Joe Buck with having some fun at Rodgers’ expense).

Earlier in the week, Ian Rapoport reported that Rodgers did not have plans to get surgery on the toe and was instead hoping that the bye week would give him the time needed to heal. However, the door remained open that it was possible.

#Packers QB Aaron Rodgers does not plan to have surgery on his toe at this time, per me and @TomPelissero. At this time is key. The hope is during the bye it will heal and improve.

Rodgers appeared on The Pat McAfee Show on Tuesday and discussed his plans specifically, confirming that he was not planning on getting surgery but, even if he did, he would expect to be back within days to play that weekend.

"We're hoping to avoid surgery obviously but it'd be so minor that I wouldn't miss any time.. I could have surgery on Monday or Tuesday & play on Sunday" ~@AaronRodgers12#PatMcAfeeShowLIVE pic.twitter.com/CN2r5cFioY

“I’ll just keep getting treatment. We’re hoping to avoid surgery obviously but the surgery would be such a minor one,” said Rodgers. “It wouldn’t be something that I’d have to miss time with. It’s a pre-req[uisite] for any surgery that I have at this point. I’m not gonna miss any time. We’ll kinda reassess early next week and make a decision. But it’s something where I could get surgery on Monday or Tuesday and play on Sunday.

“Surgery would immobilize the toe. That would be an issue the entire season I would deal with. I would avoid any further displacement but it would immobilize the toe. We’re hoping that, with a couple weeks here, we can get enough healing that maybe we can avoid doing that. Now, we’ll reassess later this week and early next week, but the ultimate goal is to not have to do surgery.”

So we’ll see how things go. It sounds like while Rodgers is going to do everything he can to avoid surgery, the possibility still exists. But the hope is that he’ll be able to play out the rest of the season and see things through.

In the meantime, Rodgers knows at least one NFL personality who appreciates all the foot discussion.

Aaron Rodgers on @PatMcAfeeShow regarding his feet pics: "I think Rex Ryan probably enjoyed it."

Never gonna live that one down, Rex.