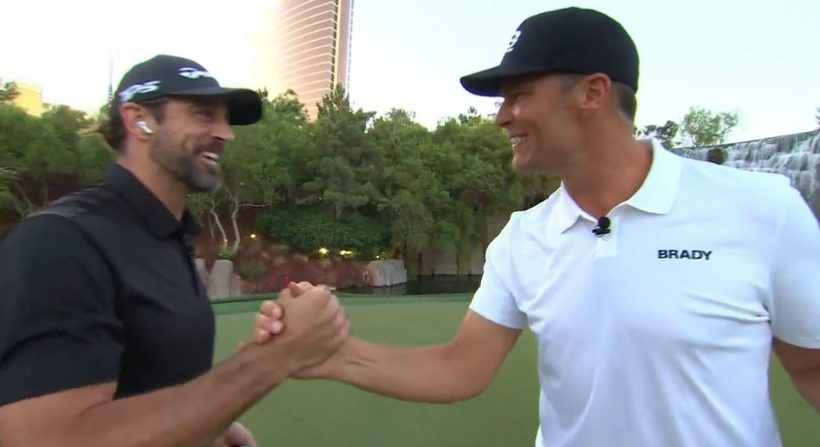 Watching The Match, it’s pretty clear that Aaron Rodgers, Tom Brady, Patrick Mahomes, and Josh Allen are better at football than golf. Still, the quartet did provide an entertaining contest on the links that went down to the bitter end.

It was a scramble format for 12 holes of match play. After nine holes, it appeared youth would be served, as Mahomes and Allen were one hole up with only three to play. But Rodgers and Brady squared the match on the 10th hole. After the two teams halved the 11th hole, the Par 3 12th hole became winner-take-all. In the event of a tie, the four would retreat back to the tee for a closest to the pin contest. Thanks to Rodgers, that was not necessary.

Mahomes and Allen had already made their par, leaving Rodgers and Brady with a birdie putt to win. Brady’s attempt missed, but Rodgers came through.

The Green Bay Packers, of course, celebrated the heroics of their starting quarterback.

They were not the only ones to do so.

Aaron Rodgers with a DAGGGGGER to win it

A Rodgers putt into a fist pump to walk off The Match.. hell of a show

Wow, I had no idea @AaronRodgers12 was such a good golfer. You almost wonder if he'd be better off retiring and going for a spot on the PGA Tour.

Even Skip Bayless had to honor Rodgers — in his own way, anyway.

Aaron Rodgers: clutch putter. Not so clutch playoff QB. If only the Packers played golf in January.

Mahomes and Allen made life challenging for themselves on the 12th hole. While Mahomes’ ball was on the green, Allen’s was actually closer to the hole. But instead of taking Allen’s shot, which was well off of the green, the quarterbacks opted to try their luck with the long putt. Allen nearly provided the shot of the day on the long birdie attempt.

But, in a moment that might have brought back unwelcome flashbacks to Bills Mafia, his putt was wide right.

That opened the door for Rodgers and Brady.

This event is definitely at its best when professional golfers are playing alongside other athletes. But obviously, when an event is being held during golf season and two weeks before the U.S. Open, that’s not an option. Given the circumstances, the four quarterbacks did not disappoint.