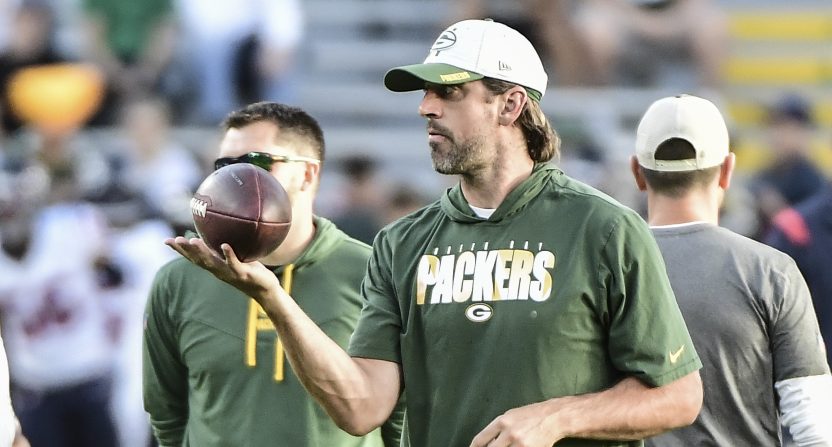 NFL insider Ian Rapoport dropped a bombshell on Wednesday morning, reporting that Green Bay Packers quarterback Aaron Rodgers is unvaccinated against Covid-19 and is listed as “out” for this weekend’s huge game against the Kansas City Chiefs.

#Packers QB Aaron Rodgers is unvaccinated, per me and @MikeGarafolo. That’s why he’s out for Sunday vs. the #Chiefs.

Furthermore, ESPN reported that Rodgers has tested positive for Covid and that the NFL has considered Rodgers unvaccinated since the season started. That was extremely confusing considering that Rodgers previously said that he was vaccinated. Or at least, he said that he had been “immunized” when asked back on August 26.

Here’s the video on August 26th when Aaron Rodgers was directly asked if he had been vaccinated pic.twitter.com/kskQDRpWi8

“There’s guys on the team that haven’t been vaccinated,” Rodgers added at the time. “I think it’s a personal decision, I’m not gonna judge those guys.”

#Packers QB Aaron Rodgers received homeopathic treatment from his personal doctor to raise his antibody levels and asked the NFL to review his status. The NFL, NFLPA and joint docs ruled him as unvaccinated. Now, he has COVID-19.

It turns out that Rodgers received an “alternative treatment” for Covid in Canada before training camp, before petitioning the NFL to allow that to count as an approved vaccine. The league ultimately said no. And because of that, now that he has tested positive, the Packers quarterback must quarantine for a minimum of 10 days and cannot return until Nov. 13 at the earliest, assuming he is asymptomatic.

This revelation also means that Rodgers has been breaking protocols all season long, standing on sidelines without a mask, and many others. It’s unclear if he’s been admonished for them.

Aaron Rodgers purposely misled people about his vaccination status. I respect loudly unvaccinated people like Cole Beasley more than I respect Rodgers, who has interacted with people who thought he was vaccinated while not wearing a mask.

It’s a stunning turn for the season’s strangest media circus. Rodgers came into the NFL season mired in drama between him and the Packers. He silenced critics with his play on the field and plenty of wins. He’s made his opinion known on a lot of topics and remained in the spotlight while doing so.

Last week, after a taunt against the Bears, was widely appreciated, Rodgers went on a weird rant about “woke culture” all because one person associated with the franchise didn’t like it. It was the kind of misguided discourse that comes from someone who doesn’t like the idea of being criticized by even one person.

For his sake, we hope Rodgers doesn’t check social media this week because he is getting absolutely roasted over his deception.

Dying at Aaron Rodgers answering vaccine questions by saying "yeah, I'm immunized." The answer of someone who spends all his free time on r/WallStreetBets.

In very plain terms, yes, this is exactly what Aaron Rodgers was doing https://t.co/s3wXdrEWlq

wildest part of this aaron rodgers story is the nfl didn’t laugh him out the building when he presented those cockamamie workarounds.

It’s a stunning turn of events that could not only change the trajectory of the Packers season but also Aaron Rodgers’ career in Green Bay. Definitely more to come on this wild story. And as for the anticipated showdown between Rodgers and Patrick Mahomes, we’ll just have to wait and see if that happens another time.