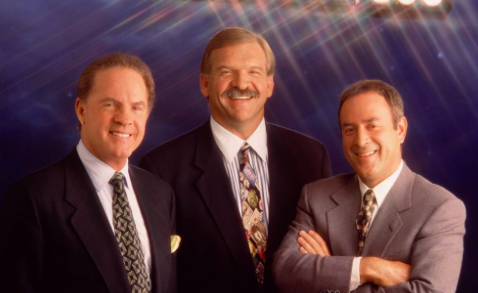 It’s been 12 seasons since ABC was regularly broadcasting the NFL. The network first brought the league into primetime with Monday Night Football all the way back in 1970 and televised the series for 35 years before moving to ESPN in 2005. The series has continued on cable since that time.

Currently, ABC is the only one of the major four broadcast networks that doesn’t air the NFL. But that could change next year. John Ourand in Sports Business Journal says that the network is expected to place a bid on a Thursday Night Football package for the 2018 season.

The news for a potential ABC bid comes as a surprise for a couple reasons. First, we’ve seen ABC pretty much get rid of its own sports division and just use the ESPN branding for many years now. In fact, it was just after MNF moved to ESPN that ABC Sports became “ESPN on ABC” in 2006. Furthermore, ESPN has moved many of its prime sporting events to cable in recent years and away from broadcast television. The College Football Playoff may be the best example of that trend. (The ESPN/ABC simulcasted playoff game could be an exception the other way, but it’s still very much under the ESPN banner.)

Second, there has been a fair sense of speculation regarding whether or not the NFL is just too expensive for ESPN, especially with their recent financial stress. It’s no secret that ESPN has been looking for ways to better balance its budget and there’s no bigger strain on that budget than the billion dollar deal the network has with the NFL. Does it really make sense that Disney would want another nine figure deal on top of that? CBS and NBC split a $450 million annual contract with the NFL to broadcast Thursday Night Football alongside NFL Network and streaming partners Twitter and Amazon.

Conventional wisdom seems to think that ABC would be left on the outside looking in. But going against the grain, there are a couple factors that give one cause to think it could happen.

First is the fact that the NFL’s Thursday Night Football contracts are usually short-term deals that don’t carry the heavy financial commitment that ESPN’s Monday Night Football deal does. (Yes, as ridiculous as it may sound, we’re talking about hundreds of millions of dollars as a light commitment.) And really, part of the genius of the NFL’s Thursday Night package are these short-term deals that get more interested suitors to get a quick boost from having the NFL on their platform. Players, coaches, and even some fans may not like Thursday Night Football, but it’s proven to be a money maker for the league. And it’s proven to be a ratings winner for the networks that televise it.

And as the SBJ report points out, ABC has seen some success with showing sports in primetime. Their college football game of the week has done very well and the network has just added an NBA primetime series in the spring on Saturday nights. Adding Thursday Night Football would definitely make a much larger splash than either of those two properties.

Taking all of this into account, I’d still be pessimistic over ABC’s chances. Does Disney really want to field questions from all of their stockholders after months and months and months of scrutiny over ESPN’s finances on why they spent hundreds of millions more on even more NFL rights for ABC?

Then there’s the question of whether ESPN/Disney really want ABC to be a serious player in broadcast television sports or whether they want most of their major live sports on ESPN. Right now, it’s pretty much the NBA, college football, the Indy 500 and… not much else for ABC. The list of former ABC Sports properties is much larger than current ones. The NFL wants Thursday Night Football on broadcast television, which is why it’d have to be on ABC and not ESPN.

And the elephant in the room? ESPN is still without a president after John Skipper’s sudden resignation. Without a long-term plan in place, it’s hard to imagine ABC suddenly jumping back into primetime NFL action. Stranger things have happened, but NBC and CBS would still have to be prohibitive favorites to maintain their current partnership on Thursday Night Football.