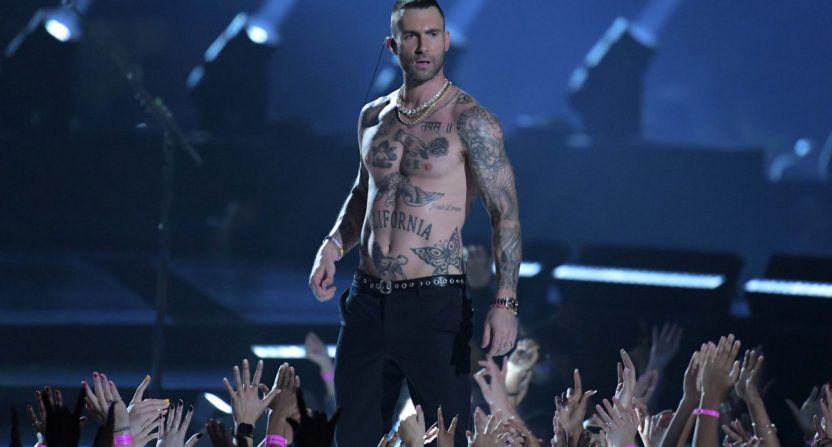 Maroon 5 anchored the Super Bowl LIII halftime show, both by being the main performers and by serving as dead weight Big Boi and Travis Scott were forced to carry.

The highlight (for Twitter comedy/trainwreck purposes) or lowlight (for all other purposes) was Adam Levine stripping to his waist, revealing the sort of tattoo artistry that would make the guy with a mostly-blue face that used to work at my hometown Wal-Mart shake his head.

Adam Levine is tattooed like he's the main character in Memento but the mystery is where he left his Juul. pic.twitter.com/FxBAxOPnsG

Levine’s poor decision to show off decades of other (and somehow poorer) decisions led to an array of viewer complaints to the FCC, as procured and compiled by both Deadspin and SB Nation. Amusingly (and delightfully), many of the complaints seem to actually be a referendum on the inherent double standards applied to Levine and Janet Jackson, whose nipple also made a much briefer appearance during a Super Bowl halftime show, and whose career was damaged over it.

Some of them seem like they were from people equally offended in both instances, but others are clearly from viewers offended only by the unequal reception to both bare-chested moments. Here are some of those, via SB Nation’s James Dator:

“In 2004, CBS was fined $550,000 for airing what has become known as the “Nipple Slip”. In 2019, CBS aired Adam Levine removing his shirt exposing both nipples. This must be dealt with in a similar manner, or the double standard must be made public.”

“Adam Levine, lead singer for the Maroon 5, took his shirt off, exposing his breasts and nipples. I believe that, when this happened to a woman in 2004, Janet Jackson, a complaint was lodged and CBS was fined $550,000. I would expect the same enforcement here.”

“It is completely unacceptable for you to allow Adam to show his nipples at the half time show for the super bowl and to fine Janet Jackson! Either fine Adam twice as much or apologize to Janet and reimburse her!!!”

“Janet got fined 1,000,000 and her career was ruined over an accident. Adam Levine willingly shows everything except his crotch that is unacceptable!!!! How do I explain this to my children???”

You can view every complaint here (or via pictures as compiled by Barry Petchesky at Deadspin), which would give more of an overall flavor. For example, here’s a complaint that seems completely genuine in its outrage:

“Adam Levine showed his nipples during the half time show. It was crude, offensive, and morally repugnant. He should be investigated and CBS should be fined for showing such a corrupt and sinful act. Such a showing was indecent and Adam Levine should not be allowed on broadcast or cable television.”

And then there were some that were clearly more of the total joke variety:

If we must learn something from this experience, pointing out the hypocrisy inherent to the  Janet Jackson incident is certainly a worthy outcome. Former CBS exec Les Moonves went to appalling lengths to hurt Jackson’s career in the aftermath of the Wardrobe Malfunction:

Moonves ordered Viacom properties VH1 and MTV, and all Viacom-owned radio stations, to stop playing Jackson’s songs and music videos. The move had a huge impact on sales of her album “Damita Jo,” which was released in March 2004, just a month after the Super Bowl.

It didn’t end there, either:

Seven years after the 2004 incident, Moonves told several sources he was furious when he found out Jackson had signed a book deal with Simon & Schuster for her book True You: A Journey to Finding and Loving Yourself. Simon & Schuster is owned by Viacom.

“How the fuck did she slip through?” Moonves asked while recounting the story to a source who spoke to me. He told another source that heads were going to roll as a result of the deal.

It seems unlikely that Levine is going to face anything more harmful to his career than a few jokes about his tattoos. Nor should he, obviously, but the double standard is real. That should probably be more of a discussion, and if it takes a trove of FCC complaints to push that forward, so be it.