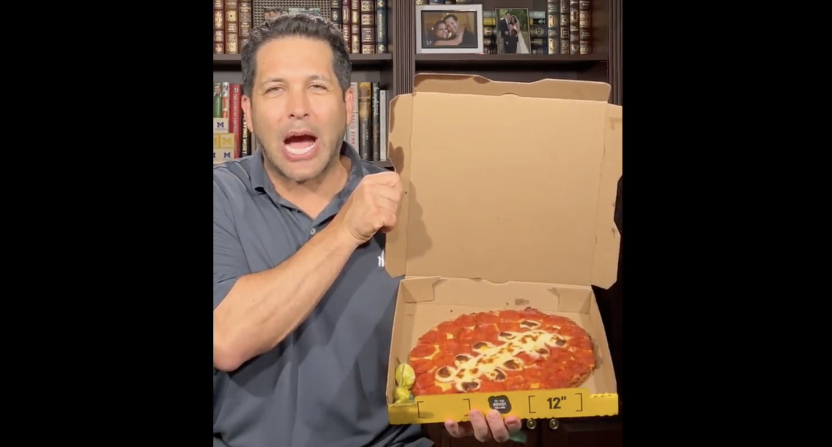 ESPN NFL insider Adam Schefter does and says a lot of weird things that other objective journalists would never dream of. One of those things is being a pitchman for products and services around the NFL and football. Schefter, no stranger to promoting NFL ad partners in the past, was back at it on Monday with an ad for Papa John’s.

Schefter, whose journalistic integrity has been called into question numerous times in recent years, was here to promote Papa John’s new football-shaped pizzas, which are supposed to be appealing to football fans getting ready for the upcoming season.

Given the reactions that NFL fans were sharing on Twitter after watching the ad, it doesn’t sound like there’s that much excitement over the new product or the fact that a “reporter” is schilling for it.

Why does this screenshot look like an absentee father trying to win over his kids with pizza after ignoring them for 10 months?

You don’t have to do this

IMO that is a great collaboration as their pizza, for me, tastes like what I imagine a football tastes like. 😂

Would you eat this, Adam? I don't think you would eat this. I would not either…FWIW. https://t.co/3ELxUQE6PP

There’s a lot of weird and uncomfortable stuff going on here.

One, you’ve got ESPN’s top NFL insider hawking products, which is just wild no matter how much Schefter and others try to legitimize it.

Two, Schefter is promoting a pizza unrelated to the NFL’s actual pizza partner, which isn’t technically a conflict of interest but, then again, a reporter covering the NFL promoting a rival pizza to the NFL’s partner pizza creates a confusing paradox.

Three, the pizza looks terrible and it’s unclear why anyone would find the shape of a football appetizing.

And four, it’s not even the first time Schefter has been involved in weird pizza-promotion-related shenanigans. At least he pointed out it was an ad this time.