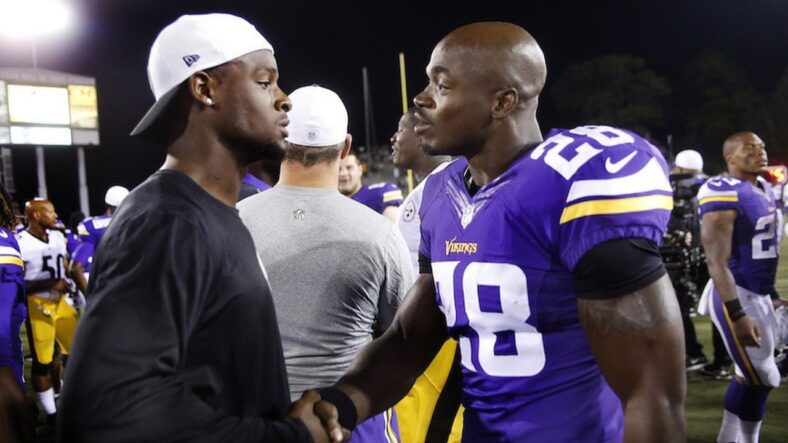 The 2010s featured a ton of excellent NFL running backs who had a huge impact on the current generation, but there were perhaps few better than Adrian Peterson and Le’Veon Bell.

Running back is a position where careers typically don’t end gracefully and both of them were barely hanging onto their NFL careers last season. While both seem to plan to continue their NFL journey next year, it appears that they are also pursuing a venture outside of football…against each other.

TMZ reported on Monday that Peterson and Bell are in the process of ironing out the details of a celebrity boxing match at Crypto.com Arena next month.

A boxing showdown between two NFL superstars is in the works — Adrian Peterson is currently in the process of becoming Le'Veon Bell's opponent at https://t.co/qHgwpU4d1K Arena next month, TMZ Sports has learned. https://t.co/AbPLmM62S5

Bell revealed his desire for boxing last NFL season when he announced that he had considered retiring from the NFL in order to pursue a career in boxing before signing with the Tampa Bay Buccaneers in the middle of the year. He had been looking for an opponent for this event, and it looks like he has now found a willing dance partner in Adrian Peterson.

This news has garnered mixed reactions around the NFL world. Some are excited to see how the fight plays out between the two big-name veterans of the NFL.

I’ll pay for this https://t.co/eX8lmel8cR

i will be tuned in lol https://t.co/GWAK9ooaUD

Others are saddened to see that both NFL veterans are at this point of their careers and see this as a publicity stunt just for the money.

These boys going out SAD https://t.co/LHmNiVEwDq

This is sad, man. https://t.co/bLqHApcJZJ

Whether it ends up being a good fight or a complete disaster, many will certainly tune in to watch this spectacle, that is, if they iron out the details and it becomes official in the coming weeks.