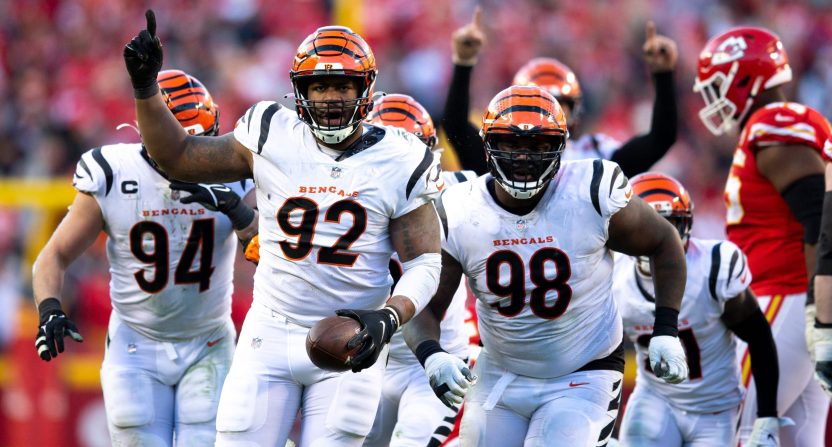 While the Cincinnati Bengals have defeated the Kansas City Chiefs three times over the last two seasons — including in last year’s AFC Championship Game — the Chiefs opened as favorites to defeat the Bengals in Sunday’s rematch. That did not last long, though. By Monday night, the line had moved. Cincinnati became favored to go into Kansas City and win the AFC Championship Game for a second consecutive year.

Counting the AFL and NFL Championship Games from the four pre-merger Super Bowls, we’ve had 112 Conference Championship Games. In those games, the road team has been favored 23 times. If the Bengals remain favored up until kickoff on Sunday, what do those 23 times tell us about how they might fare?

*Editor’s Note: The years mentioned identify the year of the season. So, for example, while last season’s Conference Championship Games between the Bengals and Chiefs and San Francisco 49ers vs. Los Angeles Rams were played in January, 2022, they’d be classified as the 2021 AFC and NFC Championship Games.

All point spreads are courtesy of Pro Football Reference.

Through the first nine years of the Super Bowl era, road teams were favored six times in the 18 Conference Championship (or League in the case of 1966-1969) Games. However, one tremendous caveat needs to be mentioned. In this era, home-field advantage was not automatically given to the team with the best record. It was on a rotating basis.

The first Super Bowl, for example, matched the Chiefs against the Green Bay Packers. Kansas City won the AFL Championship on the road, as did the Packers in the NFL. Both teams had better records than their opponents and were favored. That home-field advantage policy continued in both the AFL and NFL for the remaining three years pre-merger, and in both conferences for the first five years after the merger. Of the six games mentioned, the road favorite had the superior regular season record five times.

So, with that caveat noted, it’s probably not too surprising to know that the road favorites were 5-1 in the League/Conference Championship Games of this era. The most notable instance was in 1972, when the Miami Dolphins went undefeated, yet still played the AFC Championship Game on the road against the Pittsburgh Steelers. It didn’t matter.

It’s also probably not surprising to know that the one loss came when the home underdog had a better record than the road favorite. The then Oakland Raiders (8-4-2) were favored to go on the road and beat the then Baltimore Colts (11-2-1) in the first-ever AFC Championship Game. It didn’t happen.

This period saw nine road favorites in the Conference Championship Games. A definite theme emerged. The road favorite was clearly the team with more recent playoff success in eight of these games and was debatably so in the other.

After winning two Super Bowls in a row (and defeating the Raiders to get in both), Pittsburgh went to Oakland for the AFC Championship Game. The Steelers were favored by four. The Raiders won and a year later, they were the defending champions going on the road for the AFC Championship game in Denver. They were favored by four. Much as the Raiders had done the year before, the Broncos defended their home field.

Then came a remarkable stretch of three straight seasons where the Cowboys were road favorites in the NFC Championship Game. Dallas was favored against the Philadelphia Eagles in 1980, the San Francisco 49ers in 1981 and the then-Washington Redskins in 1981. To paraphrase Joe Montana, America’s Team watched the Super Bowl with the rest of America on all three occasions.

Despite the strong finish from the 49ers and Bills, road favorites were only 4-5 in this era’s Conference Championship Games.

We wouldn’t get another road favorite in a Conference Championship Game for another five years. The Packers had eliminated the 49ers in 1995 and 1996. When they met in San Francisco for the 1997 NFC Championship Game, the same was expected. And, the same happened.

While we’ve detailed several road favorites losing, none did so nearly as spectacularly as the 2000 Minnesota Vikings. The New York Giants scored the football equivalent of a first-round knockout on the Vikings. But unlike boxing or MMA, the game continued for four full quarters after the knockout. While not quite as dramatic, the 2004 AFC Championship Game between the New England Patriots and Steelers was similar, with the Patriots dominating early and cruising to victory.

The Arizona Cardinals were not a particularly strong team in 2008. They went 9-7 and lost four of their final six games. The Eagles, meanwhile, were only 9-6-1 but had won four of their final five. Both teams heated up in the playoffs and while the NFC West Champion Cardinals hosted the Wild Card Eagles in the NFC Championship Game, bettors expected a win from the hotter team with the superior record. It didn’t happen.

Similarities can be drawn between the 2010 Bears and the 2012 Atlanta Falcons. Both hosted the NFC Championship with better records than their opponents. In both cases, though, the opponent had a better point differential and seemed to come into the game hotter. That was enough to make the 2010 Packers and 2012 49ers road favorites in the NFC Championship Game. In both cases, the home fans went home unhappy.

When the Broncos reached their first Super Bowl in 1977, they won the AFC Championship Game as a home favorite. In their most recent (to date) Super Bowl appearance, they did the same. The Broncos survived a furious comeback from the New England Patriots, giving Peyton Manning a win in his final battle with longtime rival, Tom Brady.

In 2017, the Eagles had the best record in the NFC at 13-3. But when their quarterback, MVP candidate Carson Wentz went down with a season-ending injury, a huge question mark lingered over Philadelphia. With that, the Eagles were underdogs in their Divisional Round game and an ugly 15-10 win in that game did not impress the oddsmakers enough to make Philadelphia favored against the Vikings in the NFC Championship Game. As was the case in 2000, the Vikings were routed as road favorites.

What the results tell us:

If we include the 1966-1974 games, being a road favorite in a Conference Championship Game is a good thing to be. All told, those teams are 13-10. In those 13 wins, the favored team is 11-1-1 against the spread. But if we take those games when home-field advantage was not determined by record out, it gets a little more murky.

Since 1975, home underdogs have done a better job defending their stadiums. Road favorites are only 8-9 since home field advantage became something awareded to the highest-seeded team.

If you’re a Bengals fan looking for a comparison to draw from, the 1997 NFC Championship Game between the Packers and 49ers provides some decent parallels. The Packers had a strong record in recent games against the 49ers, much like the Bengals do against the Chiefs. Also, like Green Bay, Cincinnati had the more recent trip to the Super Bowl. But if we take a bigger sample size of about five years, the era has been more favorable to the Chiefs, much like the 90s were to the 49ers.

The closest historical example for a Kansas City fan to draw from would probably be the 1976 Raiders. It’s not an exact parallel, because the Oakland defeated Pittsburgh during that season. Still, the recent history had been largely favorable to the Steelers, much as the current recent history of the Chiefs. vs. Bengals rivalry has tilted towards Cincinnati. But Kansas City isn’t exactly coming out of nowhere, either.

Whether you want to take the entire history and say road favorites are 13-10 or eliminate those early years and say they’re 8-9, the numbers aren’t overwhelming. If the current trends hold, both the Chiefs and Chargers will have a lot of positive history to bolster them and a lot of negative history to learn from.