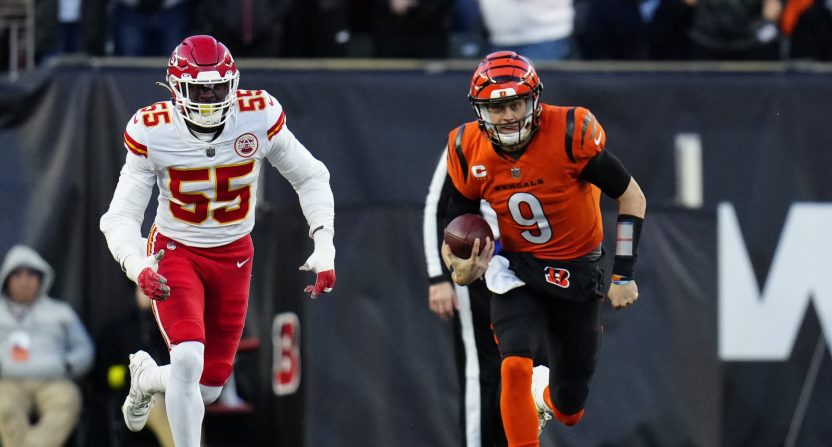 The Cincinnati Bengals and Kansas City Chiefs will square off for a highly anticipated AFC Championship Game rematch on Sunday at Arrowhead Stadium. Cincinnati throttled the Buffalo Bills 27-10 as a six-point road underdog in the AFC Divisional Round, while the top-seeded Kansas City Chiefs held off the Jacksonville Jaguars 27-20 at home.

After the Bengals’ blowout victory on Sunday, the Chiefs opened as up to three-point favorites — depending on the sportsbook — over Cincinnati in the AFC Championship Game. However, the betting line featured eye-opening movement on Monday.

The Bengals have gone from underdogs to up to 1.5-point favorites to beat the Chiefs in Kansas City.

Chiefs are now home underdogs for the AFC Championship 👀

That’s quite a shift in one day, and there could be several reasons for the line movement.

The health of Patrick Mahomes stands out as potentially a huge reason, of course. Mahomes missed some time during Saturday’s win — and was replaced by Chad Henne, who led a 98-yard touchdown drive — due to a high-ankle sprain that did not look pretty.

This did NOT look good for Patrick Mahomes. He's staying in, for now. 🏈 pic.twitter.com/O4Ym5YPSiR

Mahomes said after the game that he’ll be “good to go”, and Chiefs head coach Andy Reid downplayed the severity of the injury on Monday. But, it’s hard to ever completely trust coachspeak on such topics, and oddsmakers may have heard more details on the injury, to go with bettors being skeptical.

"X-rays were negative. They haven't diagnosed anything yet. But I'll be good to go."- Patrick Mahomes to Melissa Stark on his injury. pic.twitter.com/OkmzUDtJpW

And then it’s possible that the betting community is just buying more into the Bengals’ success. After all, the Bengals won this same AFC Championship matchup in Kansas City on Jan. 30, 2022, and as seven-point underdogs. Joe Burrow and company have shown to step up on the big stage in brutal road environments, with the most recent example featuring remarkable dominance in Sunday’s win over the Bills.

Mahomes at less than 100%, to go with Burrow and the Bengals looking so good, have likely been the main reasons for substantial line shift.

Here’s a peek at how NFL fans and the betting world have reacted to the Bengals-Chiefs AFC Championship Game line movement:

The Cincinnati Bengals have moved to 1-point favorites at many sportsbooks.

If the line holds, it would be the first time in Patrick Mahomes' career that he's an underdog in the NFL Playoffs

Bills were rated approx equivalent to healthy KC and closed -6 home to Cincy.

Bengals rating obviously goes up after Sunday and Mahomes injury is significant but the swing from Bills -6 to Chiefs +1 seems QUITE DRAMATIC.

Bengals have been the NFL’s best team ATS and they’re now favored at KC. Are they finally earning appropriate respect? pic.twitter.com/IDaWWZztLT

This will be an interesting line to track ahead of Sunday’s kickoff. The winner will take on either the San Francisco 49ers or Philadelphia Eagles in Super Bowl LVII.

Update: On Tuesday, the Bengals moved up to 2.5-point favorites over the Chiefs at sportsbooks such as DraftKings and FanDuel.