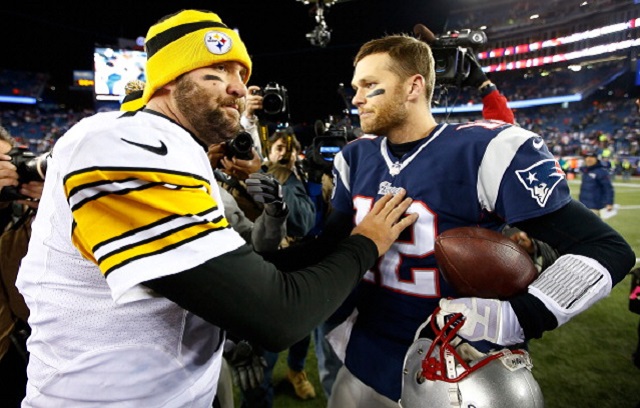 It just feels like the New England Patriots and Pittsburgh Steelers have met more often than they actually have in the NFL Playoffs, probably because they’re both almost always in contention.

This will mark the ninth time in 14 years in which either Tom Brady or Ben Roethlisberger have represented the AFC in the Super Bowl, but the Patriots and Steelers have actually never met in the postseason at Gillette Stadium, and they haven’t met at all in the playoffs since the Pats handed Big Ben the first loss of his NFL career in the 2004 AFC championship game.

The Patriots have won all three regular-season meetings between these two since 2012, though, and they’re fully expected to prevail at home Sunday. But by no means should Pittsburgh be overlooked in a matchup between two Hall of Fame quarterbacks trying to put cherries on top of their respective legacies.

** The Patriots have won eight straight games, but are coming off a less-than-stellar divisional playoff performance. Only two of those eight wins came against playoff teams.

** The Steelers have won nine straight games, but are coming off a less-than-stellar divisional playoff performance. Only three of those nine wins came against playoff teams.

10 things you need to know

The Patriots beat the Steelers 27-16 in Pittsburgh back in October, but the Steelers didn’t have Roethlisberger that day and backup Landry Jones was forced to throw 47 passes. That alone is enough for us to disregard the outcome, especially considering the Pats still had superstar tight end Rob Gronkowski at that point. Gronk caught all four of his targets for 94 yards and a touchdown in the victory, but he’s out for the year after undergoing midseason back surgery.

Of course, the site has also changed. And the difference between Heinz Field and Gillette Stadium can’t be understated. Brady and head coach Bill Belichick are 16-3 in home playoff games. When serving as the primary quarterback, Brady has lost 17 regular-season and playoff home games in his entire 16-year career. Pittsburgh is 1-4 all time in Foxboro, and Big Ben has struggled quite a bit this season on the road. Among 32 quarterbacks who have thrown at least 200 passes away from home, Roethlisberger ranks 26th with a passer rating of 77.8. He has a sub-60 completion percentage and as many interceptions as touchdowns (nine apiece).

Juxtapose that with a his home numbers — 70.9 percent, 22 touchdowns to seven picks and a 115.3 passer rating, which ranks second in the NFL — and it’s clear he could be in some trouble in New England.

While Brady nearly put together a mistake-free regular season — setting a new single-season record with a touchdown-to-interception ratio of 28-to-2 — Roethlisberger hasn’t been close to as consistent. He throws arguably the best deep ball in the game, and when he and top weapon Antonio Brown are in a groove they’re tough to stop. But he’s thrown multiple picks in five of his 16 outings and he’s posted a sub-80 passer rating seven times (something Brady did just once in 12 regular-season affairs).

The Steelers are winning games and putting up a lot of points, but the offense has often been saved by red-hot running back Le’Veon Bell. Roethlisberger has thrown eight interceptions in his last five games and is coming off a dud performance against the Chiefs in which he failed to lead the offense on a single touchdown drive. Against a defense that rather quietly held opponents to a league-low 15.6 points per game, that doesn’t bode well.

Expect Brady — who threw a season-high six passes that traveled 20-plus yards last week — to frequently target top wide receiver Julian Edelman deep against a Pittsburgh defense that Football Outsiders ranked dead last in coverage against No. 1 receivers. The Pittsburgh secondary is somewhat soft, so in order to compensate for that vulnerability they’ll have to apply consistent pressure on Brady. That’s never easy, because the New England line is solid and Brady’s impeccable footwork buys him extra time. But the ageless James Harrison has been lighting it up on the edge for a Pittsburgh D that had a league-high 30 sacks during the final nine weeks of the regular season.

It’ll also help if New England can establish the running game and maintain balance on offense. LeGarrette Blount gashed the vulnerable Pittsburgh run D for 127 yards on 24 carries in their regular-season meeting, but Blount faded down the stretch, averaging just 2.6 yards per attempt during the final three weeks of the regular season. He hasn’t hit the 90-yard mark in any of his last seven games, and Dion Lewis hasn’t been much better.

The Steelers had some trouble with Kansas City’s Spencer Ware last week and were rocked by Blount, Isaiah Crowell, Jay Ajayi and Ezekiel Elliott during the regular season. Can Blount and/or Lewis get it together in order to exploit that weakness?

An argument can be made that the Patriots picked the perfect time to play a far-from-perfect game last week against a Houston team that stood little chance in Foxboro. Brady and the Pats rarely struggle in back-to-back weeks, so optimists will tell you that’s out of their system now.

But it should be noted that Brady completed more than half of his passes in each of the first 30 playoff games of his career before failing to do so in each of his last two. He completed just 27 of 56 passes and threw two interceptions in a conference title game loss to the Broncos last January, and he followed that up with an 18-for-38, two-pick outing against Houston last week.

In Brady’s last 12 playoff games — dating back to 2011 — he’s completed just 60.6 percent of his passes, has averaged just 6.9 yards per attempt, has a pedestrian-by-his-standards 22-to-13 touchdown-to-interception ratio and a passer rating of 85.0. But the Pats still won eight of those 12 games. It’ll be interesting to see if he can get back on track against that strong Pittsburgh defensive front.

Belichick is a master at taking away whatever the opposing offense does best. But when Roethlisberger, Bell and Brown are rolling, defenses are usually forced to pick their poison. Historically, Belichick has shown a preference for shutting down passing attacks and daring running backs to hijack games, and that might not be too tall a task against a Steelers receiving corps that lacks top-end talent beyond Brown.

Still, focusing on containing Roethlisberger and Brown is risky, because Bell has averaged a ridiculous 178.9 yards from scrimmage in his last eight games. He’s on an historic tear.

So while New England’s deep and versatile front seven has been good against the run (3.9 yards-per-attempt and a league-low six rushing touchdowns allowed; zero 100-yard rushers), they might not want to tempt fate here.

On Saturday night, a salty and misinformed Earl Thomas claimed Brady and the Pats have “the easiest route” to the Super Bowl, thanks to the division they reside in. It’s true, the AFC East isn’t strong and according to Football Outsiders, New England had the easiest schedule in the league in 2016.

But can you blame the Patriots for the quality of their opponents? They’ve still won 12 of their 13 games with Brady under center, with 10 of those wins coming by double-digit margins. Maybe the Patriots wouldn’t have gone 14-2 with a middle-of-the-pack schedule, but they likely still would have won as many games as the 11-5 Steelers despite the fact Brady missed the first quarter of the season.

The Pats were an NFL-best 5-1 this season against teams that finished the regular season with winning records. Pittsburgh was 3-3.

Tom Brady launches it DEEP…
But it's intercepted!@dshead24 comes down with the pick. #SEAvsNE https://t.co/ItefmDP5Vu

9. All-or-nothing in the turnover department

The Patriots are sort of all-or-nothing team when it comes to turnovers. Since Brady returned from suspension in Week 5, they’ve turned it over just 10 times. But all 10 of those came in just four games. They’ve had nine turnover-free games and four multi-turnover games, but they’ve never had just one turnover. Might be a fluke, but it’s worth noting that those multi-turnover games came against tough defenses (Baltimore, Houston, Seattle and these very Steelers, who had two takeaways in their regular-season meeting).

The Steelers were the sixth-most-penalized team in the league this season, and they had defenders flagged for unnecessary roughness after violent and illegal headshots in each of their first two playoff games. It’s a habit they’ve failed to break, if they’ve even tried to do so. And not only are plays like that bad karma, but they could cost you a football game. Sean Davis’ hit on Chris Conley nearly did exactly that last week. The Patriots are much more disciplined than the Steelers, and that could make a difference on Sunday.