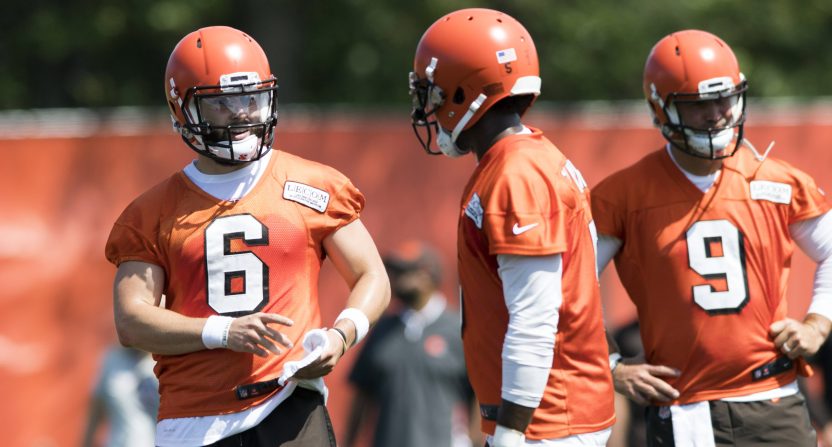 For the second straight season, the Pittsburgh Steelers were the only team from the AFC North to make the playoffs. The Baltimore Ravens were close to getting into last year’s postseason, but were left looking from the outside after a loss to the Cincinnati Bengals in Week 17.

Featured in the AFC North last year was the winless Cleveland Browns. The Browns became just the second team in NFL history to finish with 16 losses in a single season.

It’s hard to imagine Cleveland failing to win a game in 2018. But will any of the other three teams from the AFC North win more games this season than the amount they finished with in 2017?

If not for giving up a last minute touchdown against the Cincinnati Bengals in Week 17, the Ravens would have taken part in last season’s AFC playoffs. Instead, the Ravens missed the postseason for the third straight year and the fourth time since winning the Super Bowl in 2012.

After beginning 2017 with a 4-5 record, Baltimore won five of their last seven games. However, only two of their final five wins came over opponents with a winning record.

The Ravens appear to be on the brink of a rebuilding period and that could not have been made more clear from the team’s selection of Louisville quarterback Lamar Jackson in the first round of last April’s NFL Draft.

Other than adding a bunch of wide receivers that no one else wanted (Willie Snead, Michael Crabtree, John Brown), Baltimore is entering 2018 with a very similar roster to what they had last year. Unless the Lamar Jackson show begins sooner than later, the Ravens could be heading towards their final season with John Harbaugh as their head coach.

Following last season, many expected the Bengals to move on from longtime head coach, Marvin Lewis. However, that did not happen and Lewis is returning to Cincinnati in 2018 for his 16th season with the team.

Not much has changed personnel wise for the Bengals since last season either. Cincinnati is still the home of underwhelming quarterback Andy Dalton, linebacker Vontaze Burfict is still getting suspended, and the team thinks they have a “rivalry” with the Pittsburgh Steelers (3-14 vs. Pittsburgh since 2010).

The Bengals do have a new defensive coordinator in Teryl Austin this year, but he is not expected to make that much of a difference. It will be an achievement for Marvin Lewis if he is still Cincinnati’s head coach on Christmas.

This was obviously not a hard prediction to make. Only two teams have lost 16 games in a season in the history of the NFL and no team has gone winless two years in a row.

So yes, the Browns will have at least one victory in 2018. More than one though? That is not as easy to predict.

For some reason, Cleveland refused to fire head coach Hue Jackson after last year’s disaster. So the Browns still have that going against them.

On paper, Cleveland’s roster is more talented this season with additions like Tyrod Taylor, Jarvis Landry, Carlos Hyde, Denzel Ward, and Damarious Randall. How Jackson is able to get all of these new players to work as a cohesive unit remains to be seen.

Should the Browns be more competitive this season? Yes they should be. But will they end up in the playoffs? Putting money on that would not be the smartest decision in the world.

Despite Ben Roethlisberger appearing to be on the backend of his NFL career, the Steelers quarterback can still lead the team to wins with the offensive weapons he has around him.

Along with Antonio Brown, JuJu Smith-Schuster, and Le’Veon Bell, Pittsburgh also added a duo of talented rookies to their arsenal this year in James Washington and Jaylen Samuels.

On the defensive side of the ball, the Steelers have to hope that the unit doesn’t suffer from the loss of Ryan Shazier. But with players like TJ Watt, Cameron Heyward, and Joe Haden, Pittsburgh should be able to have one of the top defenses in the NFL.

The Steelers have won more than 13 games in a single season just twice in their history, which is the explanation for them having worse record in 2018 than they did last season.