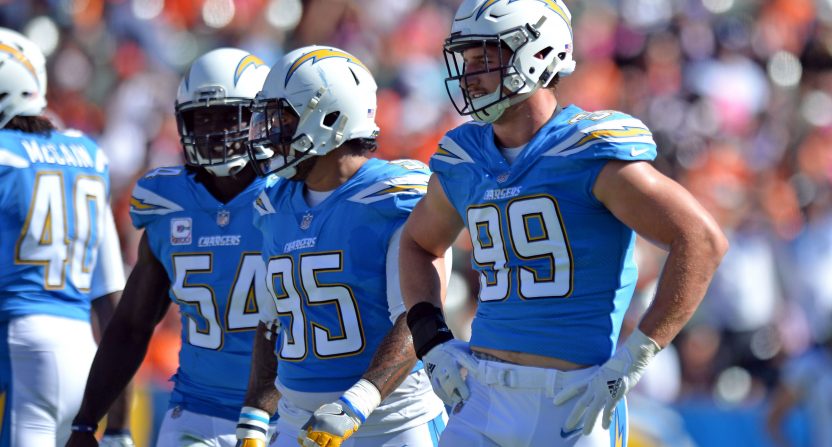 For the past 15 years, the AFC West has been dominated by the Denver Broncos and Los Angeles Chargers. Both the Broncos and the Chargers have won the division at least five times since 2004.

However, the last two seasons have seen the Kansas City Chiefs finish atop the AFC West. In fact, the Chiefs have actually won the division more times (three) than Los Angeles has (zero) since 2010.

For the 2018 season, the AFC West is really up in the air. With new head coach Jon Gruden leading the way, even the Oakland Raiders might have a chance at winning the division for the first time since 2002.

The level of play in the AFC West should improve this season, but will any of the four teams win more games than the amount they finished with in 2017?

It has been two years since the Broncos last won the AFC West. Since then, they have only managed to win a total of 14 games and failed to find their way back into the playoffs.

For 2018, Denver is putting all of their hopes into the hands of new quarterback Case Keenum. After a magical run with the Minnesota Vikings last season, the Broncos gave Keenum a contract worth $36 million this year and they are basically expecting him to continue his success from 2017.

The only problem is that Keenum will be working with a significantly lower amount of talent on offense this season in Denver than what he had with the Vikings last year. The Broncos ranked 27th in points per game in 2017 and other than quarterback, the team didn’t really upgrade any of their position groups on offense this year.

Denver’s defense is still pretty talented and will likely be what keeps them from getting blown out a ton in 2018. The Broncos should be able to finish with more than five wins this season, but missing out on the playoffs for the third-straight year seems most likely.

Since 1970, the Chiefs have never won the AFC West three years in a row. This season, Kansas City has the chance to accomplish this feat and they have the firepower to do so.

Second-year quarterback Patrick Mahomes will be taking over as the Chiefs’ starter in 2018 and he has a bunch of weapons on offense to make his transition a little easier. With Mahomes throwing to guys like Kareem Hunt, Sammy Watkins, Travis Kelce, and Tyreek Hill, Kansas City should be able to remain as one of the NFL’s top scoring offenses like they were last season.

Despite their explosive potential on offense, the Chiefs’ defense could be what prevents them from going the distance in 2018.

Kansas City was one of the league’s least impressive teams when it came to defending the pass and the run last season and they are hoping that new additions like Anthony Hitchens, David Amerson, and Kendall Fuller can help improve the unit in 2018.

10 wins seems like an achievable amount for the Chiefs this season and them finishing with 11 or more doesn’t seem too crazy of a thought to have either.

It seems like every offseason, the Chargers are picked as the surprise team for the upcoming year. But thanks to an annual onslaught of injuries, Los Angeles has not been able to meet some of these expectations and they continue to come up short of making the playoffs.

It’s no different this year as the Chargers have already lost tight end Hunter Henry and cornerback Jason Verrett to season-ending injuries. Both figured to be integral parts in the team’s attempt to get back into the playoffs in 2018.

Despite the losses of Henry and Verrett, Los Angeles still has plenty of talent on their roster to achieve success this season.

On offense, quarterback Philip Rivers is still leading the way at the age of 37 and he has a number of weapons to choose from in 2018 including running back Melvin Gordon, and receivers Keenan Allen and Mike Williams.

Defensively, Los Angeles will have a lot of players returning this season from a unit that allowed the third-fewest points per game in the NFL a year ago. Adding rookie safety Derwin James to the mix should only make the Chargers’ defense even tougher to deal with in 2018.

If Los Angeles can manage to steer clear of the injury bug that seems to strike their roster year after year, the team should be able to snag one of the AFC’s six playoff spots by the end of the season.

While Jon Gruden has been the talk of the town ever since the Raiders brought him back to be their head coach last January, the real focus for the 2018 season should be on Oakland quarterback Derek Carr.

After an impressive year on the field in 2016, Carr saw his production take a dip last year. His interception rate went up while his touchdown percentage went down, something that no team wants to see from their starting quarterback.

To help out Carr in 2018, the Raiders went out and added receivers Jordy Nelson and Martavius Bryant to their roster this offseason. Which would have been great additions if Oakland had signed these two players four years ago when they were actually good.

Defensively, the Raiders have some work to do. Especially since it looks like Oakland is about to begin the upcoming regular season without their best defender, Khalil Mack.

Gruden is likely going to get a rude awakening in 2018 when he realizes that making the Raiders a competitor once again is going to be a lot tougher than he thought.

“I’m in charge. We are not producing. I’m good with that. I’m not going to do that."

“I’m in charge. We are not producing. I’m good with that. I’m not going to do that."