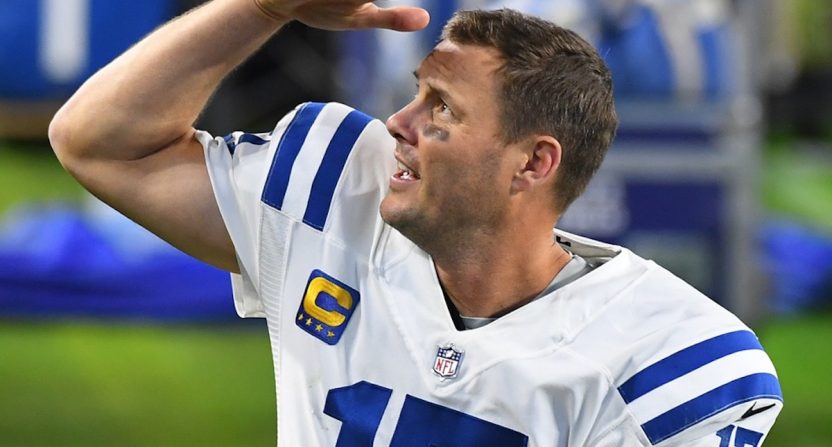 Saying “it’s just time,” quarterback Philip Rivers is calling it a career in the NFL.

Following one season with the Indianapolis Colts and 16 years with the Los Angeles (and San Diego) Chargers, the quarterback is retiring. He shared the news with Kevin Acee of the San Diego Union-Tribune Tuesday night.

Rivers, 39, ends his NFL career with 63,440 passing yards (ranking fifth all-time), 421 touchdowns (also fifth), and a 65 percent completion percentage. He threw for 4,000 yards or more 12 times in his career, including each of the past eight seasons. During his final campaign, he completed 68 percent of his passes for 4,169 yards with 24 touchdowns and 11 interceptions while averaging 7.7 yards per attempt.

An eight-time Pro Bowler, the quarterback led his team to the playoffs seven times, including this past season with the Colts. His second postseason in 2007 was his best, with the Chargers advancing to the AFC Championship Game before losing to the Patriots, 21-12.

Rivers was also extremely durable, starting 240 consecutive games (and playing in 244 overall). Only Brett Favre had a longer streak, making 297 starts in a row.

The New York Giants selected Rivers with the No. 4 overall selection in the 2004 NFL Draft. He was traded to San Diego in exchange for Eli Manning, who did not want to play for the Chargers. Rivers backed up Drew Brees during his first two seasons before taking over after Brees suffered a significant shoulder injury and left the team via free agency. He kept the job for 16 seasons.

These two crazy kids from 2004 Chargers training camp will retire in the same offseason. pic.twitter.com/JK8DVfktVt

With his NFL career ending, Rivers’s plan is to coach high school football in his native Alabama. In May, he was announced as the head coach-in-waiting for St. Michael Catholic High School in Fairhope, Alabama, following through on his ambition to follow his father into coaching prep football. The apparent expectation from school administrators is for Rivers to jump right into coaching and preparing for spring practice.

Will he be able to resist overtures from TV networks for NFL broadcasting, however? Several are reportedly interested.

I’ll never forget lining up for a play and Phil pointing to one of our linebackers and telling him he was lined up wrong based off the blitz we were about to run and being 100% correct about it haha.

One of the smartest I’ve ever played against and a hell of a competitor. https://t.co/1AZxyvDafu

Naturally with a quarterback as accomplished as Rivers, the question is whether or not he’ll be inducted into the Pro Football Hall of Fame. With the numbers mentioned above, that appears to be a formality.

No, he didn’t win a Super Bowl and maybe he’s a tier below current quarterbacks like Tom Brady, Aaron Rodgers, and Brees, along with recently retired greats such as Peyton Manning. But his longevity and performance warrant the honor. This shouldn’t even be a question. We’ll likely see Rivers in Canton five years from now.